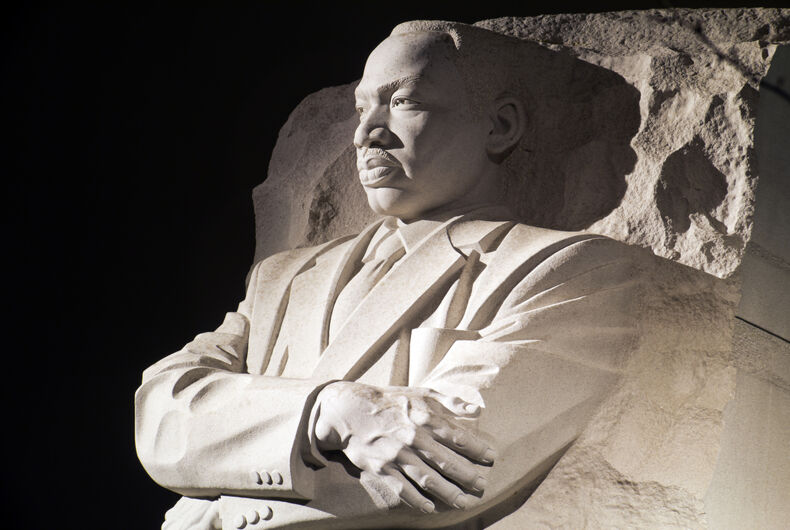 Last week the Supreme Court heard oral arguments in Masterpiece Cakeshop v. Colorado Civil Rights Commission.  The case – which has many LGBTQ Americans on pins and needles – will litigate a baker’s rights to refuse to make a wedding cake for a same-sex couple, Dave Mullins and Charlie Craig, citing free speech rights enshrined in the First Amendment.

If the case is decided in favor of the baker, Jack Phillips, it will be a colossal blow to civil rights gains and state nondiscrimination laws, legalizing the “right” to deny services to LGBTQ Americans based on the business owner’s’ religious beliefs.

Trump’s solicitor general, Noel Francisco, suggested these businesses should hang anti-LGBTQ placards like “No Gays Allowed” warning us to stay away. When Press Secretary Sarah Huckabee Sanders was asked to clarify the president’s position on the matter at a White House press conference, she responded, “The president certainly supports religious liberty… I believe that would include that.”

As a black lesbian during this Trump administration, I feel like I am moving into a new Jim Crow era reestablishing discriminatory laws targeting LGBTQ Americans.

I grew up with racist placards that said “Colored Water Fountain,” “Waiting Room For Colored Only,” “We Serve Whites Only,” and “No N—-s Allowed,” to name a few.

Since Trump has taken office there has been an erosion of LGBTQ civil rights under the guise of religious liberty. For example, transgender Americans being denied access to public lavatories is eerily reminiscent of the country’s last century Jim Crow era denying African-Americans access to lunch counters, water fountains, theaters, and restrooms.

Restrooms were a hot-button issue in the Jim Crow America as it is today – and a battleground for equal treatment.

The Civil Rights Act of 1964 outlawed discrimination based on national origin, race, hue, gender, and religion. The law mandated desegregation of all public accommodations, including bathrooms.

The Obama administration expanded the Act to protect LGBTQ Americans. However, in February Trump’s administration revoked federal guidelines permitting transgender students to use gender-appropriate facilities aligned with their gender identity.

In June, Trump failed to recognize LGBTQ Pride month and, in July, LGBTQ Americans received a one-two punch from the Trump administration.

The first punch was President Trump’s ban on transgender service members, eerily reminiscent of when the military did not want to integrate its ranks racially. In his inimitable style of communicating to the American public, the order came in the form of a tweet. Ironically, Trump’s tweet came on the 69th anniversary of President Harry Truman’s executive order desegregating the military in 1948.

The second punch occurred on the same day as Trump’s ban. The Justice Department filed court papers saying that civil rights law that bars sex discrimination in the workplace does not bar discrimination based on sexual orientation or gender identity.

While Trump’s ban caught the Pentagon and Capitol Hill off guard, the announcement was enthusiastically applauded by numerous anti-LGBTQ hate groups who have long advocated for it. They promulgate the fear that healthcare services for our trans troops would put a major dent in defense spending. (It wouldn’t. The military already spends 10x as much on Viagra alone.)

In an ad by the Family Research Council, for example, Chelsea Manning was pictured next to a military jet with the question “Which one do you want our military to be spending your tax dollars on – transgender surgeries or equipment?”

On December 11, a federal judge denied request of the Trump administration to delay enlistment deadline for transgender Americans into the military. They can enlist as early as January 1, 2018.

I am immensely thankful as a married lesbian that I reside in Massachusetts, especially if Trump tries to overturn Obergefell v. Hodges, the historic U.S. Supreme Court ruling that legalized same-sex marriage in all 50 states.

However, that may not be the case for many LGBTQ married couples outside of my state. For example, in a Trumped-up Supreme Court there is talk among Christian evangelicals of walking Obergefell v. Hodges back without disrupting other precedents on marriage,” Rebecca Buckwaler-Poza wrote in the article “The End of Gay Rights” in the June issue of Pacific Standard Magazine.

“The Supreme Court can significantly undermine LGBT rights even without reversing a single case,” Buckwaler-Poza wrote.  “Right now, the federal prohibition against sex discrimination doesn’t bar discrimination on the basis of sexual orientation or gender identity; the Equal Protection Clause affords no specific protections for LGBT people, as it does for members of groups defined by race or nationality.”

“The Court can strip the rights to intimacy and marriage of their meaning, carving away gradually and masking the magnitude of changes by phrasing them in arcane legal terms.”

A movement has been afoot for some time now in state legislatures across the country to disenfranchise LGBTQ Americans. These bills are called “Religious Freedom Restoration Acts” and are a backlash to the growing acceptance of same-sex marriage.

As lawmakers use them to codify justifications for denying us services on state and local levels, and with Trump in lock-step with these discriminatory practices, Jim Crow is already here.

Wonder Woman & Supergirl just rocked the internet by getting engaged