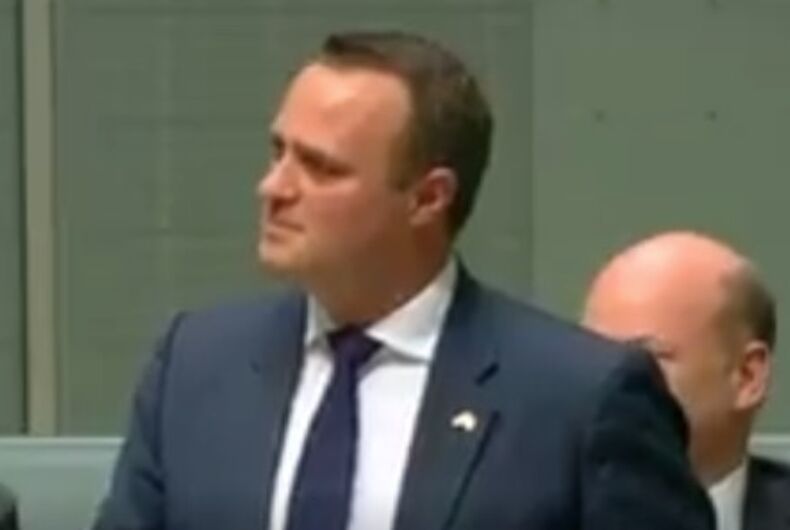 The Australian House of Representatives is debating a law to legalize same-sex marriage down under and one member simply couldn’t wait. The Senate has already passed the legislation with a vote of 43-12.

Parliament’s votes follow an emotional survey of Australians via postal vote that got incredibly ugly as anti-marriage equality forces threw everything they could into the campaign in an attempt to paint LGBTQ people in a negative light.

Member Tim Wilson’s vote was a highlight of the debate as he proposed to his partner, Ryan Bolger, who was sitting in the gallery. Bolger said yes.

Liberal MP @timwilsoncomau proposed to his partner Ryan during his same-sex marriage speech to the House of Reps. He said YES! 👬💍🌈 pic.twitter.com/of9N21WYMh

The yes vote on the non-binding postal survey meant that pressure was increased on parliament to move forward on legislation that would allow same-sex couples to wed in the country. When the measure passed, Prime Minister Malcolm Turnbull promised to push the legislation through fast enough that same-sex couple would be able to marry by Christmas.

Conservatives have tried to water down the legislation by adding “religious freedom” amendments that would amount to a license to discriminate against LGBT people. Turnbull opposed the attempts originally, but recently flipped his position in an attempt to garner more votes in favor of the bill from his own party.

The Senate voted down all attempts to amend the bill to allow Australians to claim a religious exemption to civil rights laws.

Former Prime Minister Tony Abbott, who actively campaigned against marriage equality and infamously said his sister wasn’t a good parent because she’s gay, said he would support it if it included protections from “politically correct bigotry.”

“Mr Speaker, I certainly do not pretend to be an overnight convert to supporting same-sex marriage but I pledged to respect and facilitate the verdict of the Australian people. Same-sex marriage should now be recognised. It will now be recognised,” Abbott said. “There should be a clear distinction between how marriage is understood by the church and marriage as recognised by the state and, on that basis, I looking forward to attending the marriage of my sister, Christine, to her partner Virginia early in the new year.”