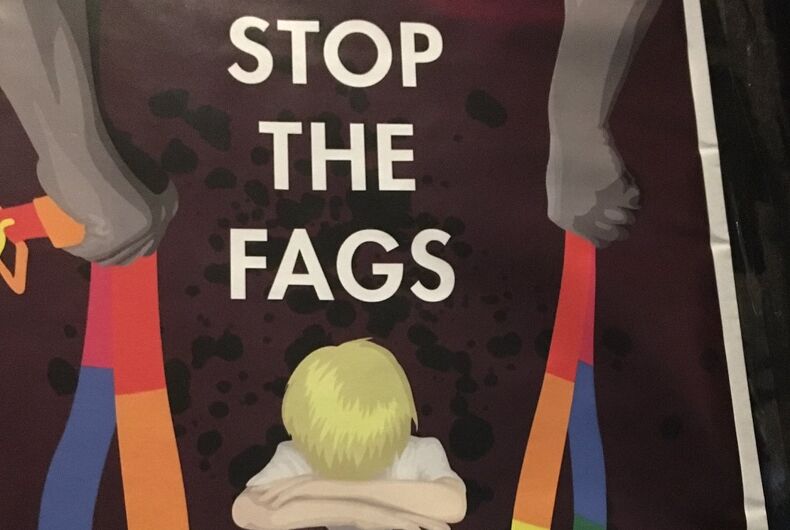 One of the signs used to campaign against marriage equality in Australia. LGBTQ organizations warned that the referendum would stir up homophobic sentiment, but straight pundits and politicians said the debate would be "civil."Photo: Screenshot/Twitter

The national, non-binding referendum on marriage equality in Australia will end this Tuesday, and polls are showing that the “Yes” campaign will win handily.

But LGBTQ rights may lose in the end no matter which side wins the referendum.

Australia is one of a few countries where same-sex couples are banned from marriage but polling data shows that a strong majority favor marriage equality.

The conservative coalition that has controlled Parliament for several years generally opposes LGBTQ rights, so Prime Minister Malcolm Turnbull, in an effort to keep marriage equality from becoming an issue in the 2016 elections, promised a national plebiscite on the issue.

Since the referendum carries no legal power, Parliament will have to pass a bill legalizing marriage equality, which they could have done without a referendum. And a marriage equality bill written by conservatives could do more harm to LGBTQ rights.

Openly gay conservative senator Dean Smith proposed a marriage equality bill that has been endorsed by the Yes campaign. It contains exceptions for religious and civil marriage officiants so that they can refuse to marry same-sex couples.

It also allows religious institutions to refuse to do business with same-sex couples. For example, a church could refuse to rent its hall for a same-sex wedding.

But this isn’t good enough for conservatives, who say they will propose up to 100 amendments to the bill.

“It is seriously inadequate, as parents, freedom of speech and religious freedom, along with conscientious objection, all need full protection,” conservative senator Eric Abetz said, referring to some of the No Campaign’s talking points, like that lifting the ban on same-sex marriage would lead to schools forcing kids to cross-dress and freedom of speech being ended.

The protections would not be limited to marriage. Conservative Member of Parliament Ian Goodenough said that the amendments go “beyond the wedding ceremony.”

The Australian Christian Lobby, which is opposed to marriage equality, said that they want to see antidiscrimination laws “overridden.” Conservative senator Cory Bernardi said, “Is it OK for any business to say they simply don’t want your business for any or no reason? Personally I think it is.”

Senator Smith said that this could lead to a major legislative battle. “If there is a Yes vote, it will be necessary for the opponents of marriage to detail their amendments. This will provide a challenge to the Liberal Party [the main center-right party in Australia] because the community will not accept any winding back of Australia’s well-established anti-discrimination laws,” he said.

Just like in the US, as the government moves to recognize LGBTQ rights, conservatives advocate against antidiscrimination laws so that the private sphere can advance inequality.

Because that’s the end goal for anti-LGBTQ forces here: oppression and inequality to express their hatred. Marriage laws and antidiscrimination laws are just means to that end.