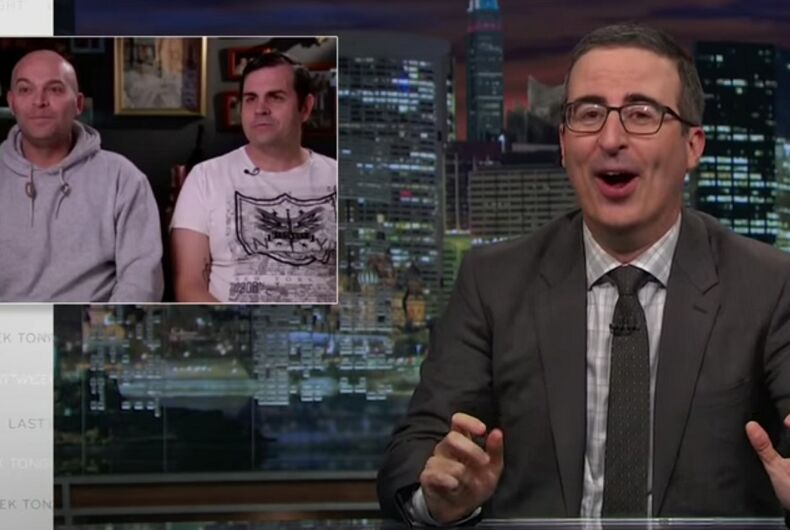 Earlier this week, John Oliver made fun of a gay couple in Australia that opposes marriage equality. Now the couple is responding.

This past Monday, the show had a segment on the marriage equality referendum in Australia.

Oliver made a few jokes about Ben Rogers and Mark Poidevin, an Australian gay couple that has been interviewed by several major media outlets. The anti-LGBTQ campaign has also used their story, because giving an inordinate amount of attention to the vanishingly small minority of gay people who oppose marriage equality makes straight people who oppose marriage equality feel less homophobic.

“Ben and I actually laughed when we first saw it,” Poidevin said. He said that a producer for the show contacted them to ask if they stood by what they said in an interview with 7.30 Report, a current events show in Australia. “I told them it was completely accurate but clarified that I do support civil unions.”

He went on to say that Oliver presented the “total opposite” of his views, even though he does oppose marriage equality, as Oliver said.

“He is a comedian. We were not expecting an amazingly intelligent presentation on the whole discussion. It’s just a late night TV show,” he said.

It’s hard to see what Oliver should have presented. In the 7:30 interview, the couple’s argument against marriage equality is this: “If we make one exception for one community, that being the same-sex couples, where does it stop? Do we then see other cultures being allowed to have multiple marriages?” That barely even qualifies as an argument against marriage equality; its purpose is to get people to vote based on their fears of something completely unrelated.

“Family in America said it was a complete hatchet job and my mum called me absolutely furious, asking ‘How could they do that to you?’” Poidevin said.

I suppose the moral of the story here is: “Don’t appear on national television to advance a political agenda if you don’t want late night comedians to make fun of your political views.”

Man found guilty in the brutal murder of gender-fluid teen