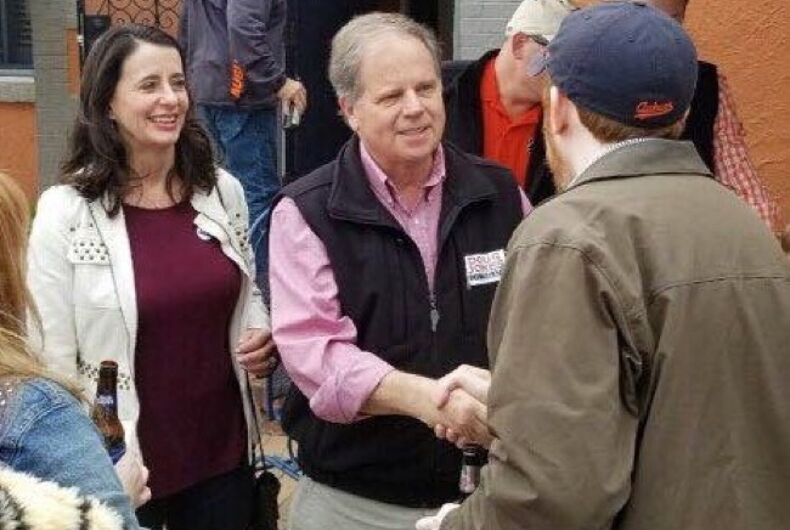 Doug Jones campaigns in his race for the Senate.Photo: Facebook

With 91% reporting, Jones won a slim victory with 49.7% of the vote according to CNN. Jones will replace former Senator Jeff Sessions who vacated the seat to become Attorney General.

Republicans were expected to keep the seat until Moore’s radical history made the race a debacle. Moore claimed the allegations were “false and malicious.”

The religious right overwhelmingly continued to support Moore despite knowing he has been accused of molesting a child and getting rich by plundering a conservative religious charity run by his wife.

Moore railed about the nebulous “they” so commonly used by dictators and racists on the campaign trail, allowing his defenders to see themselves as separate and under attack. Moore had a longstanding history of animus against the LGBTQ community.

“When I say ‘they’ who are they?” he asked his audience at one rally. “They’re liberals. They don’t hold conservative values. They are the lesbian, gay, bisexual, transgender who want to change our culture. They are socialists who want to change our way of life and put man above God and the government is our God. They’re the Washington establishment… who want to keep everything the same so they don’t lose their position, their power, their prestige.”

“Tonight, in rejecting avowed bigot Roy Moore, Alabama voters solidified once and for all that attacking and demonizing the LGBTQ community is a sure-fire way to get yourself beat on Election Day,” said HRC President Chad Griffin.

“Doug Jones’ victory in Alabama is monumental, and was made possible by the overwhelming and unprecedented, grassroots resistance of ordinary Alabamians against the politics of hate and division. From our victories in North Carolina, Virginia, and now in Alabama, Equality Voters have proven that LGBTQ people and our allies are a voting bloc to be respected, sought-after and feared by candidates on both sides of the aisle. The American people will no longer tolerate discrimination against their family, friends and neighbors.”