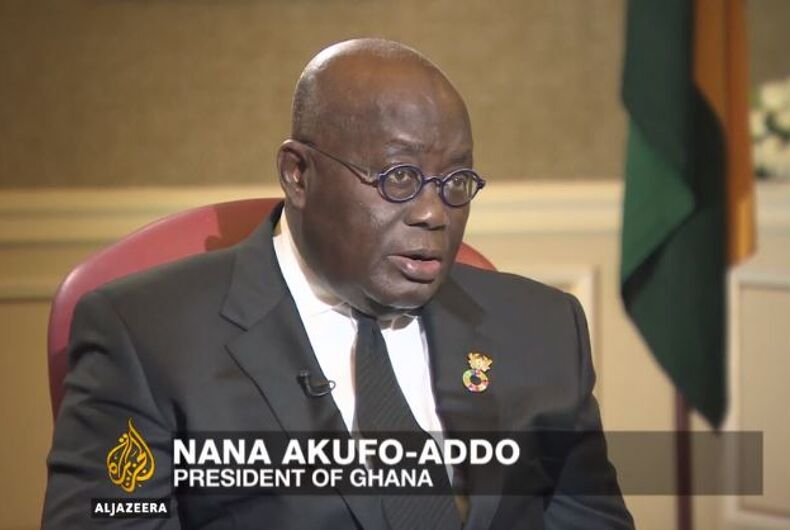 The president of Ghana has said he believes the country will legalize homosexuality in time, as public support grows.

Nana Akufo-Addo became the president in January, and during an interview with Al Jazeera last month, he was asked about the situation for the LGBTQ community in the African country he was elected to lead.

Homosexual sex is still illegal in Ghana, and can result in up to three years of imprisonment for those found guilty. In 2011, Ghana’s president at the time, John Atta Mills, refused to legalize homosexuality in spite of it threatening aid to the country.

“These social, cultural issues, if you like, I don’t believe that in Ghana so far a sufficiently strong coalition has emerged, which is having that impact on public opinion that will say, ‘Change it. Let’s then have a new paradigm in Ghana,'” he said, when asked why homosexuality was still illegal.

“I think it is something that is bound to happen,” he added.

“Like elsewhere in the world, the activity of individuals and groups [can make it happen],” he continued, noting that he lived for a time in England as a boy, when there were harsh laws against the LGBTQ community in that country.

He gave credit to advocates and activists who worked to bring changes to the law, and said he believed the same would occur in his own country.

“At the moment, I don’t feel, I don’t see that in Ghana there is that strong current of opinion that is saying this is something that we need [to] even deal with,” he said. “It is so far not a message that is on the agenda.”

You can watch Akufo-Addo make his comments in the video below, starting just past the 13 minute mark.