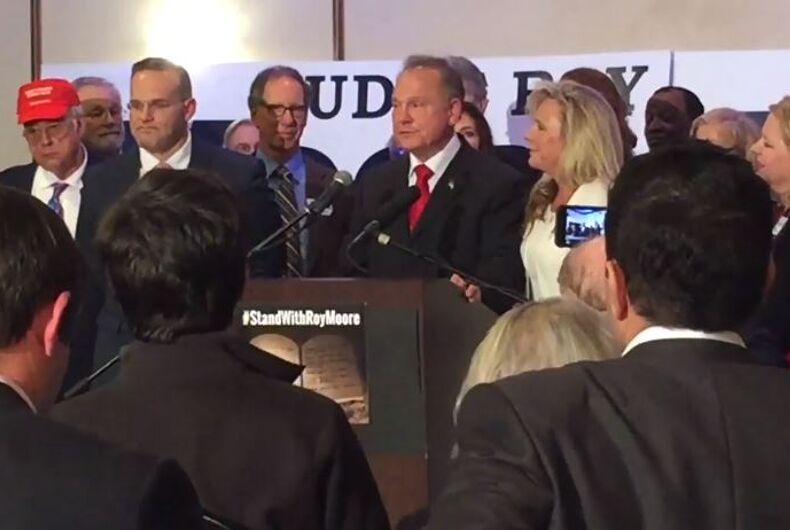 Roy Moore speaking at a press conference on Nov. 16, 2017, alongside religious leaders who support him.

The religious right is standing in Alabama Senate candidate Roy Moore’s corner amid growing sexual harassment and assault allegations, which he denies.

Not only did a recent poll find that a whopping 40 percent of Evangelicals report being MORE likely to vote for the disgraced former lawyer and judge, but many “faith leaders” from the far right held a press conference yesterday to “Stand With Roy Moore.”

Related: ‘Bring It On’ director tells Moore to keep the name of his movie out of his mouth

The press conference was organized by anti-abortion activist Janet Porter. One by one, religious figures came to the microphone to pledge support for Moore. They were among the 200 people who signed onto a letter supporting Moore, Porter said.

Among those was Noson Leiter, who made a number of anti-gay comments during his remarks.

“Judge Moore has a proven track record of fighting for public policy based on Biblical values and not perversion, and that’s why he’s a target,” Leiter claimed.

“He faithfully stands at the front lines against the enemy within,” he continued. “As the battle tested bulwark to combat those who seek to victimize children and adults through transgender bathroom bills, LGBT indoctrination in schools, and much more.”

He also denounced marriage equality, adding that we must always remember that God flooded the earth and mass murdered everyone except Noah and his family, including innocent babies, because, you know, gays.

Flip Benham, a pastor and activist from North Carolina, added to the bigotry, arguing that “homosexual sodomy destroys those who participate in that behavior and nations who approve of it.”

Benham added that “the media doesn’t understand justice” and said Moore was a Democrat in the late 1970s, “but he changed!”

Related: Roy Moore was reportedly banned from the local mall in the ’80s for badgering teens

Porter then called for questions, making it clear that she wanted to discuss only the “issues,” and presumably not the allegations issue, and that she, not Moore would take those questions.

Reporters were much more interested in Moore answering for himself.

“The major issue here, is, Judge, did you touch any of these women who have accused you of touching them? Just answer it unequivocally,” one reporter asked. “This is a room of faith – God’s listening to you too. Answer the question please.”

Porter claimed he “already answered that question” while appearing on Sean Hannity’s show, and in subsequent statements and press conferences.

The reporter pressed on, asking her to let him speak, reminding that he is the one running for office. She also reminded everyone that they payed for the microphone. How fancy.

She then called for another question, but it didn’t get any better for her side.

“You’ve read his letter, and it answers that very clearly,” she said, as the room devolved further into chaos.

Moore and his wife, Kayla Moore, walked out of the press conference at that point, as did many of the reporters.

“Alright, well we appreciate you staying, and, uh, coming, and um, I’m glad you got more church than you probably had in the past ten years,” Porter concluded.

If this is what church is like, please count us all out.

You can watch Moore’s full comments below, as well as the dodging of reporters questions.

You can watch the full press conference below.

Did Starbucks put a lesbian couple holding hands on its Christmas cup?