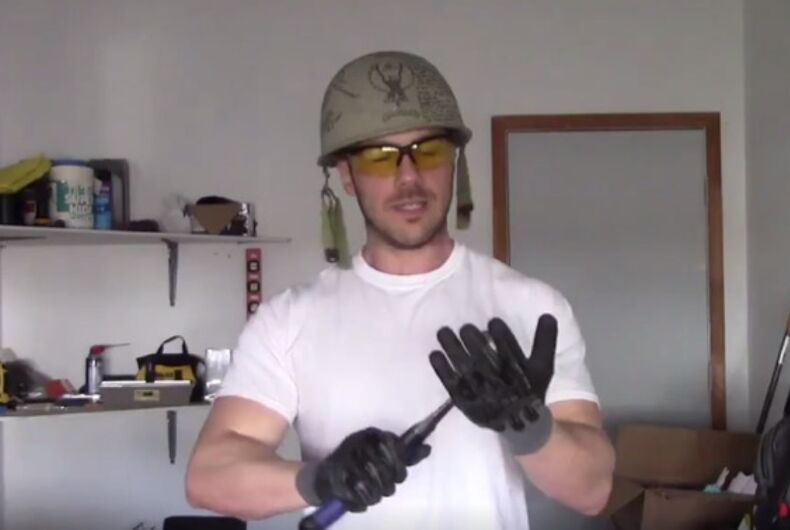 Angelo John Cage acts like an idiot on TwitterPhoto: screenshot

Fans of the notoriously anti-LGBT judge and accused child molester Roy Moore are destroying their own coffee machines to support him.

Before last week, Moore was perhaps best known for being removed from the Alabama supreme court twice – once for refusing to follow a federal order to remove a monument to the Ten Commandments from government property, and again for ordering state officials not to grant same-sex couples marriage licenses after the Supreme Court ruled that states could no longer ban same-sex couples from marrying.

Moore is now running for the U.S. Senate and, last week, the Washington Post published accusations from four women that Moore sexually assaulted one when she was 14 and he was 32 and came on to three other women who were 16- to 18-years-old when he was in his 30’s.

So he did what conservative politicians usually do when they find themselves in hot water: he went on Fox News to answer easy questions without follow-ups about the allegations and then accuse the media of attacking him.

Not only did Sean Hannity give Moore a platform to accuse the Washington Post of making it all up without interruption or question, Hannity himself has provided viewers with every reason he can think of to discount the allegations, including repeatedly accusing of the women of making up their stories for money, calling the Washington Post “liberal,” and saying that “establishment” Republicans are out to get Moore.

Several companies pulled their advertising from Hannity’s show following his appalling performance, including Keurig, the makers of those expensive coffee machines that use the little capsules that destroy the environment. Hannity’s and Moore’s fans have responded with posting videos where they destroy their own coffee machines to Twitter with #boycottkeurig.

I pulled an “Office Space” with my Keurig… Would be a shame if everyone else joined me in the Keurig Smash Challenge #BoycottKeurig #IStandWithHannity #SundayMorning pic.twitter.com/yEADeRC006

Not all the videos involve a long-winded straight white dude who thinks he’s funny. This one is more pithy.

This guy seems to be threatening to ruin his own coffee with a mix of soybean oil and garlic powder.

Of course some people are pulling out their guns.

Others are just using the trash.

As others have noted, this isn’t really a boycott since these folks are destroying coffee machines that they already bought. Instead, this reminds me of the protests against the Dixie Chicks in 2003, where conservatives were getting together to destroy CD’s that they had already bought.

Conservatives are generally economically comfortable enough to destroy their own possessions every now and then, and they’re violent people who get a high off breaking things when they’re mad.

And in both cases, the rage was because they were supporting a cause that is so clearly morally bankrupt: the Iraq War in 2003, and a child-molesting politician in 2017. The wrongness of their cause is what makes them break things – they know that their arguments about why it’s OK for a 32-year-old to fondle a 14-year-old without her consent will fail.

Was a North Carolina church burnt down because it’s an ‘antigay hate group’?