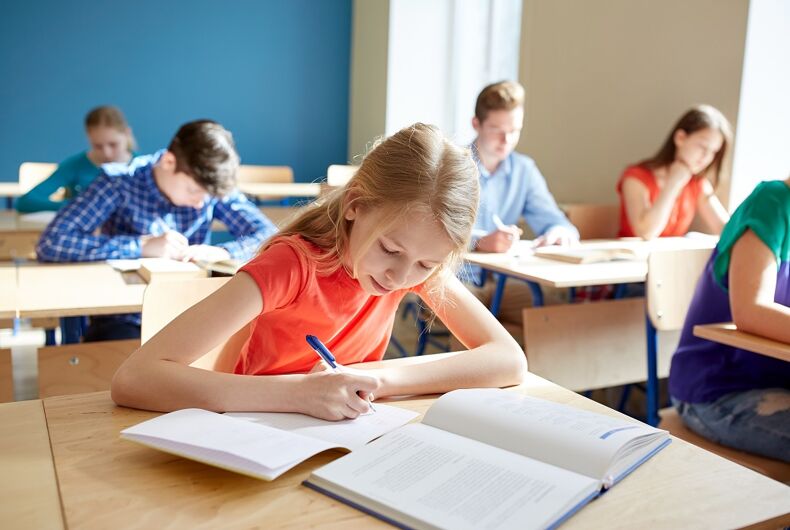 The California State Board of Education just agreed to recommend ten LGBTQ-inclusive history textbooks for grades K through 8. The board also rejected two books from Houghton Mifflin Harcourt that failed to include LGBTQ people.

In 2011, California passed the FAIR Education Act, which added people with disabilities and LGBT people to the list of minorities whose contributions must be included in textbooks in the state.

“This long fought victory is the next step for California students to learn about the contributions and history of LGBTQ people,” Equality California executive director Rick Zbur said.

School districts in California do not have to choose a book recommended by the state, but many do. Either way, their curriculum has to meet state standards.

Earlier last week, a commission recommended the rejection of the two textbooks from Houghton Mifflin Harcourt.

The commission’s report noted that the textbooks discussed historical figures like Walt Whitman and Emily Dickenson without discussing their sexual orientation. “The absence of specific labels regarding sexual orientation creates an adverse reflection because the identity of these individuals is not honored and demeans their contributions to history. The depictions of these individuals do not specifically refer to achievements in art, science or other fields as LGBTQ contributors.”

In a written response, Houghton Mifflin Harcourt said that it questioned the validity of applying contemporary terms to historical figures. “The achievements of people who experience or express sexual desire for their own sex as well as those who do not conform to conventional gender norms are central to both United States history and culture. However, HMH feels that the terms lesbian, gay, bisexual, transgender, and queer are contemporary terms that may not map well on past lives and experiences.”

Instead the publisher included some information in the teachers’ materials that said, for example, “Though Whitman never publicly addressed his sexuality, his poetry, letters, and journals suggest that Whitman would identify as gay if he were alive today.”

Despite Houghton Mifflin Harcourt’s response, the commission was amenable to other publishers’ objections to labeling certain historical figures with words that they themselves did not use.

Conservatives, of course, opposed any inclusion of LGBTQ people at all. The California Family Institute, in a blog post, said that the law “doesn’t take into account the sincerely held moral and religious beliefs of millions of California parents.”

As one person on the commission said, LGBT issues were “a very small sliver” of their evaluation of textbooks, but that a lot of attention was placed on it because California is the first state to use it as a criterion at all.

15th man to accuse Kevin Spacey: ‘His face’ was ‘shocking and then scary’