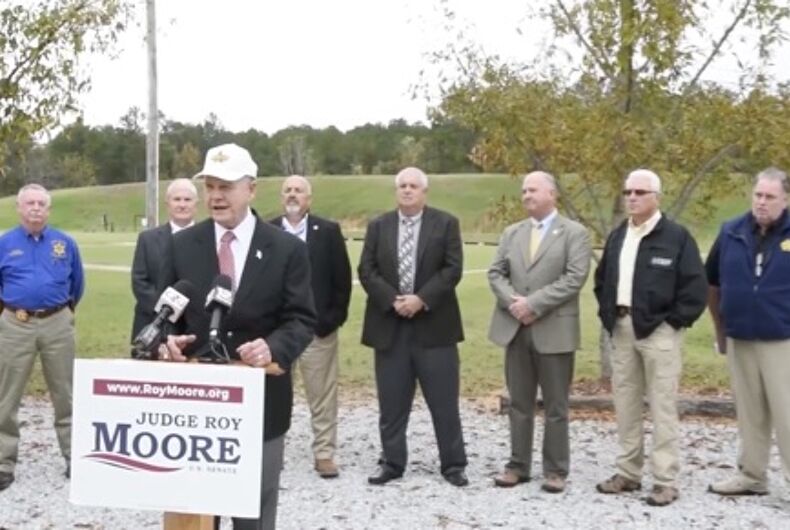 The day before Alabama senate candidate Roy Moore was accused of molesting a 14-year-old girl when he was in his early 30’s, he was surrounded by adoring county sheriffs endorsing him as a law and order candidate.

Three other women accused Moore of inappropriate behavior while they were between the ages of 16-18, but Moore responded by fundraising off the accusations. He calls the women “the forces of evil” in his money beg and invokes his religion as a defense.

The day before, Moore was on the offense as 13 county sheriff’s endorsed his campaign for the senate. At a press conference to announce their endorsement, Moore attacked his opponent, Democrat Doug Jones, for supporting “transgender issues and transgender rights in the military,” according to the Montgomery Advertiser.

“The transgenders don’t have rights,” Moore said at the press conference. “They’ve never been denominated as having rights by the US Supreme Court. He believes in transgender bathrooms and transgenders in the military. I disagree with him 100 percent.”

Shortly after the sexual abuse allegations became public, the Alabama state auditor compared Moore’s proclivity for teenagers to Joseph and Mary, saying, “Mary was a teenager and Joseph was an adult carpenter. They became parents of Jesus.”