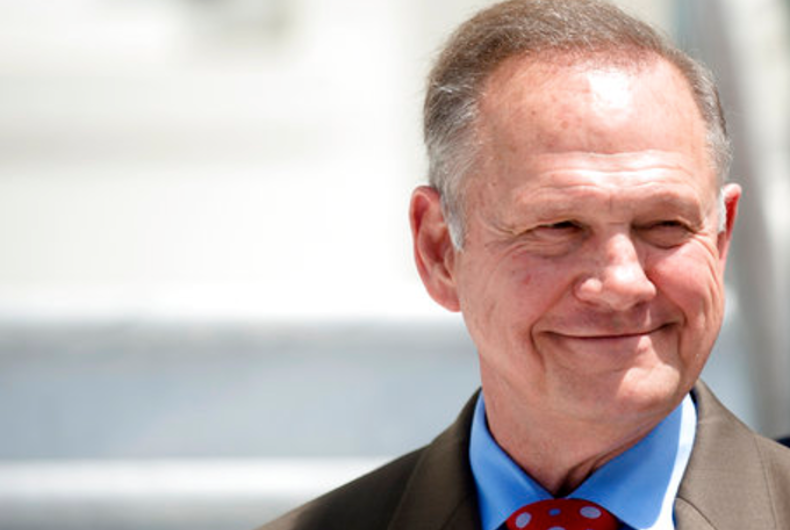 Alabama senate candidate Roy Moore, who has been removed from office as a judge on the state supreme court twice, faces allegations of child molestation after four women stepped forward yesterday to describe their experiences with Moore.

Only one of the women, who was 14 at the time, said there was sexual contact. The other women were between the ages of 16-18 at the time while Moore was in his early 30s.

“The allegations are that a man in his early 30s dated teenage girls. Even the Washington Post report says that he never had sexual intercourse with any of the girls and never attempted sexual intercourse,” state auditor Jim Ziegler said in an unhinged defense of Moore.

“Roy Moore fell in love with one of the younger women,” Ziegler continued, referring to Moore’s wife. “He dated her. He married her, and they’ve been married about 35 years. They’re blessed with a wonderful marriage and his wife Kayla is 14 years younger than Moore.”

Moore, who has so far refused to answer any questions about the allegation, instead chose to capitalize off of the story. He claims he is the victim of the media and denied the allegations without mentioning what they actually were and attempting to claim victimhood and rally evangelical Christians to his side.

“The Obama-Clinton Machine’s liberal media lapdogs just launched the most vicious and nasty round of attacks against me I’ve EVER faced,” Moore writes in the email sent to supporters. “I won’t get into the details of their filthy and sleazy attacks.”

“We are in the midst of a spiritual battle with those who want to silence our message,” Moore continued. “That’s why I must be able to count on the help of God-fearing conservatives like you to stand with me in this critical moment.”

You can read the full email at the bottom of this article.

Ziegler also tried to turn the charges into a “spiritual” matter, citing scripture in an attempt to deflect the charges against Moore.

Evangelicals were largely Trump supporters who didn’t bat an eye at his infamous “grab them by the pussy” comment, so Moore’s strategy of distracting and scaring them could possibly work to get him elected despite his history of financial chicanery, disrespect for the law, and the allegations of sexual abuse.

Roy Moore is out with a fundraising appeal that seems to relate to the WaPo story pic.twitter.com/oPNCthae9c

#FakeNews: No, 71% of gay men do not hate feminine guys despite ‘study’ results