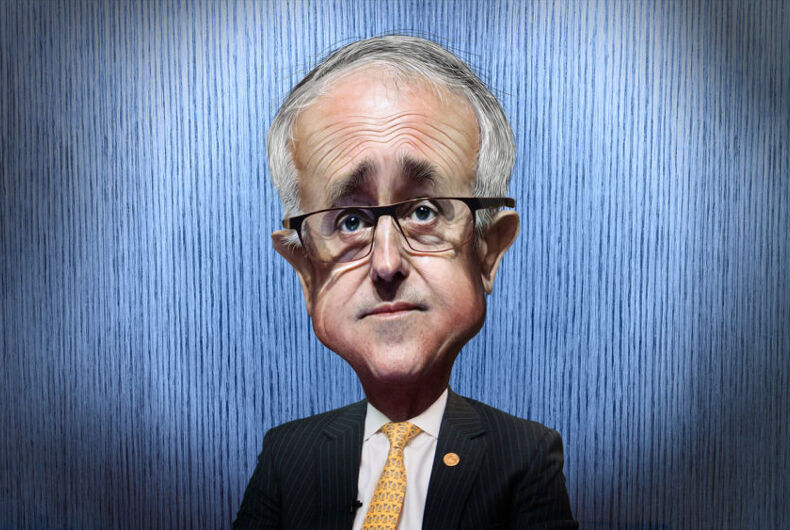 Australians recently voted overwhelming in support of marriage equality in a postal survey, with over 60 percent voting yes. It is now up to Parliament to act on the will of the people, albeit since the vote was nonbinding they are under no direct pressure to do so.

Still, Turnbull said that Parliament would not break for the holidays until the country had passed a bill legalizing same-sex marriage, which he promised would occur before Christmas.

While the prime minister may be anxious to get legislation passed, many in his conservative party aren’t so keen. It seems he is now willing to sellout the LGBTQ community by granting religious people a license to discriminate, so long as they cite their faith as the cause for so doing.

According to The Australian, Turnbull will back an amendment that would allow religious persons to refuse to offer wedding related services to same-sex couples when it heads to the House.

“Nothing in this Act limits or derogates from the right of any person, in a lawful manner, to manifest his or her religion or belief in worship, observance, practice and teaching,” the bill reads.

Both amendments were voted down in the Senate.

“The Prime Minister supports protections for religious freedom, including safeguards for the legal status of charities, as well as provisions that would ensure that marriage celebrants are able to decline to solemnize marriages which they do not wish to solemnize,” a spokesperson for Turnbull said.

“Depending on the form in which amendment proposals are presented to the house, it is likely that the Prime Minister will support measures that seek to provide greater protections in the legislation, where the legalization of same-sex marriage necessitates immediate action on those protections,” the spokesperson added. “The reason amendments were unsuccessful in the Senate is because Labor refused to allow its senators a free vote on those amendments.”

The marriage equality bill’s architect, Senator Dean Smith, has said that the religious freedom amendments are not necessary.

“The bill expresses a faith in the current architecture of Australia’s religious protections. The architecture is precise,” he said.

Ruddock “spent much of his time in office battling to undermine LGBT rights, heading to court to deny a veteran’s pension to a gay soldier’s partner,” PinkNews reports. “In 2006 he also sought to block a gay Australian man from marrying in the Netherlands, refusing to grant a ‘Certificate of No Impediment to Marriage.'”

The review’s report is expected in March.

“Any reforms to protect religious freedom at large should be undertaken carefully,” Turnbull has said. “There is a high risk of unintended consequences when Parliament attempts to legislate protections for basic rights and freedoms, such as freedom of religion.”

Religious freedom has been a topic of great debate in the United States as well, particularly since President Donald Trump was elected.