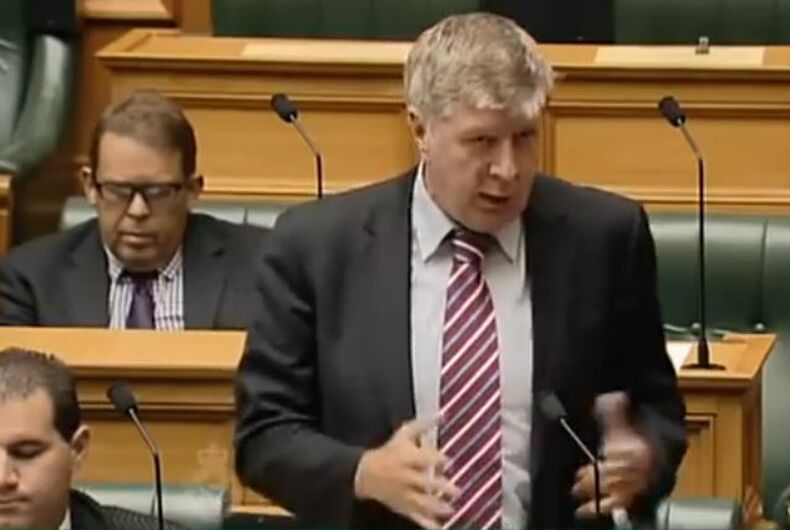 A speech by former New Zealand Member of Parliament (MP) Maurice Williamson in support of marriage equality has gone viral in Japan four years after it was delivered.

New Zealand legalized marriage equality in 2013, and during that debate Williamson made international headlines for his humorous declaration to opponents of same-sex marriage.

“All we are doing with this bill is allowing two people who love each other to have that love recognized by way of marriage,” William said. “That is all we are doing.”

“We are not declaring nuclear war on a foreign state. We are not bringing a virus in that could wipe out our agriculture sector forever,” he continued. “We are allowing two people who love each other to have that recognized, and I can’t see what’s wrong with that.”

“I give a promise to those people who are opposed to this bill right now,” he said. “‘I give you a watertight guaranteed promise: The sun will still rise tomorrow, your teenage daughter will still argue back with you as if she knows everything, your mortgage will not grow, you will not have skin diseases or rashes, or toads in your beard, sir. The world will just carry on.”

He added that one of the messages he received in opposition to the bill said it was the cause of their drought.

He then noted that it was “pouring with rain” that morning, and that there was “the most enormous big gay rainbow” across the sky.

A Twitter user in Japan posted the speech to Twitter recently, after a local politician there made a statement against allowing the same-sex partners of state guests to attend palace dinners.

Williamson notice an uptick in Twitter followers coming from Japan, but wasn’t sure why.

I am so happy to see such a huge increase in the number of new followers in the last few hours – many of them coming from Japan. I don’t know what’s driving it but I’m delighted. For the record: My oldest son Simon Kenya is half Japanese so I’m proud of the association. Welcome.

Twitter users from Japan quickly let him know what was up by responding to his tweet with an explanation, as well as their appreciation.

Your speech on the same sex marriage bill in 2013 in parliament went viral on twitter. Sadly inappropriate comments made by our MP on the invitation list in palace dinner, suggesting that same sex parter should be declined for invitation.

Hello. I’m from Japan. I also watched your speech in 2013. I was really really impressed with your speech. I believe your speech changed NZ and also Japan. For you, it might be past, but for me it’s now. So please let me thank you for your speech. I sincerely appreciate you.

Watched your speech. It was the greatest speech I’ve ever seen and very impressive. Your speech has made so many ppl happy and definitely will make more ppl happy. I hope this speech will be spread even more in Jpn so that Jpn also makes the same decision.

And I am so happy that I now live in NZ where ppl like you work for the parliament. Your country is amazing. I have truly love here but after I watched your speech, I love NZ even more. Thank you so much.

Hi:) I live in japan, I watched your speech in 2013. It was amazing ! I hope Japanese people accept about it.

Thank you for the moving speech.
Japan also needs to change, for our future peace.
I believe that the video gave us some courage to become brave for a next step.

I also came from japan, and I was moved by your speech. In fact I visited New Zealand for a few months this year and I felt that gay people in New Zealand is proud of themselves without embarrassing. That’s a different point between japan and nz. Thanks

I watched your speech at 2013, it is very impressive and I follow you. I think japan need someone like you.

Hi I’m Japanese living with Kiwi husband in Hamilton. Your speech was legendary and so cool!!

You can watch the speech in full below.