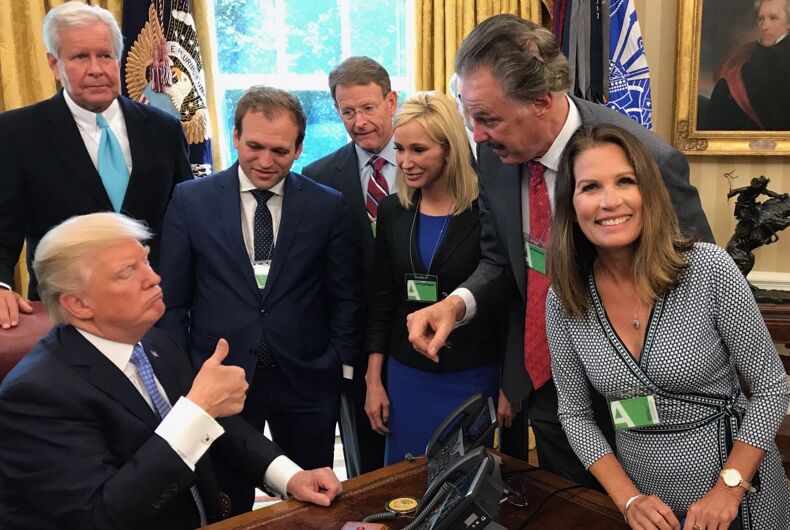 The memos direct US Attorneys, department heads, and federal agencies to “effective immediately, incorporate the interpretative guidance in litigation strategy and arguments, operations, grant administration, and all other aspects of the Department’s work, keeping in mind the President’s declaration that ‘[i]t shall be the policy of the executive branch to vigorously enforce Federal law’s robust protections for religious freedom’.”

The directive gives sweeping protections to companies that want to deny health coverage like birth control to employees, instructs attorneys not to “second-guess the reasonableness of a religious belief,” and would allow employers and businesses to ignore any law if they claim a religious belief – even if it’s not a tenet of their faith.

While the directives mention both sexual orientation and gender identity specifically, it sidesteps the issue of LGBT rights by punting the issue to Congress and effectively tying the hands of the government from providing discrimination protections for the community.

“This Guidance does not resolve any specific cases; it offers guidance on existing protections for religious liberty in federal law. The Guidance does not authorize anyone to discriminate on the basis of race, ethnicity, national origin, sex, sexual orientation, or gender identity in violation of federal law or change existing federal and state protections.”

Yesterday Sessions told employees that the Department of Justice will no longer interpret Title VII’s gender protections to include gender identity for DOJ employees. It also states that the DOJ will “take that position in all pending and future cases (except where controlling lower-court precedent dictates otherwise, in which event the issue should be preserved for potential future review)” – a direct contradiction of his memo from today.

Late last month, the DOJ intervened in a private court case to argue that Title VII did not protect a gay man from discrimination. The EEOC (Equal Employment Opportunity Commission), an independent civil rights safeguard agency and a federal court had ruled in the man’s favor. The DOJ’s intervention was remarkable since it pitted two federal agencies against each other and it is incredibly unusual for the Department of Justice to intervene in a private court case.

The directive would also allow Catholic hospitals to deny care to LGBT people, give companies the right to refuse to serve LGBT people, and would allow private companies to fire, demote, or otherwise punish any LGBT employees by claiming a religious exemption. The memo, while couching its broad religious exemptions from existing law, directly instructs attorneys to ignore the “Johnson Amendment” which prohibits churches from making political donations or endorsing candidates.

“It is a dangerous overreach for President Trump to try and dictate how women and LGBTQ Americans access their health care and contraception,” said Sarah Kate Ellis, President and CEO of GLAAD. “The Trump Administration is actively cloaking controversial policies under so-called ‘religious exemptions’ when the policies, in fact, directly attack marginalized communities who often experience discrimination at a daily basis. President Trump must be called out for hiding behind so-called ‘religious exemptions’ and held accountable for his clear anti-LGBTQ and anti-woman agenda.”