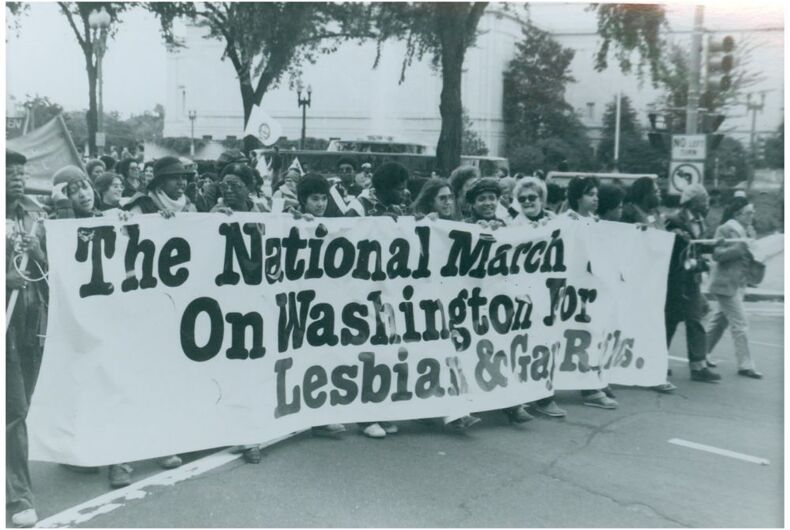 Washington, DC had never seen anything like it. Nor had the world: The National March on Washington for Lesbian & Gay Rights, held October 14, 1979, almost 40 years ago, was truly groundbreaking.

An estimated 75,000-100,000 people gathered with their queer brethren that. Some turned out to hear Allen Ginsberg, who read his poem “Song.” Others were waiting for Robin Tyler, the comedian who spoke truth to power when she quipped, “When a heterosexual person shows a picture of his family, it’s called sharing. When we show a picture of our lover, it’s called flaunting. We want to share.”

The people cheered when Juanita Ramos and Armando Gaetan spoke in English and then Spanish: “Greetings you beautiful multicolor people… Greetings from this Chicano from Massachusetts… Greetings from Latino lesbians and Latino gays…” Some turned out to hear California-based activist Howard Wallace, who declared that day, “A new day is coming, [and] it will come so much sooner if we cast out the great authoritarian father figures housed in our minds.”

But all came out to be seen — to be seen by friends, lovers, the world. Stonewall let them step out the closet; now they were marching toward unity, taking disparate local movements and forming a national coalition, one that was loud, proud and visible. Such visibility was paramount at the time: most of America still hadn’t accepted the fact that we’re here and queer.

Thus began a four decade quest to earn mainstream recognition and respect, a mission that seemed (until last November) to be on its way to success. Things weren’t perfect —bigots still refused to serve us and only a hodge-podge of state laws protect LGBT folk from employment and housing discrimination, but it appeared as we were on the right track.

But, alas, then hate-filled Donald Trump and his spineless, sycophantic, equally abhorrent, amoral cronies were installed in the White House, from where they’ve been working overtime to erase LGBTQ people from public policy.

They’ve courted anti-LGBT hate groups; banned transgender people from the military, deleted our existence from federal websites, and, most recently, Trump and his underlings covertly erased any and all mention of LGBTQ people’s health needs from the Health and Human Services’ strategic plan. This is unacceptable.

The White House pretends as if LGBTQ people aren’t part of this country, are not Americans; they pretend that we simply don’t exist. That means that it’s up to us to remind them, to rally and to march and to make our voices too loud to be ignored — not just at marches and protests, but every day and in every way.

As Audre Lorde said that day in 1979, “Affirmation and work does not stop with this march on Washington. Each of us has a responsibility to take this struggle back to her and his community translated into daily action. Let us carry this solidarity that we are professing here today back with us into our everyday lives tomorrow and the day after and next week and next year. And let it be reflecting in a renewed commitment to a struggle for a future where we can all flourish, for not one of us will ever be free until we are all free.”

He was a Nazi for almost his entire life. Now he’s coming out as gay.