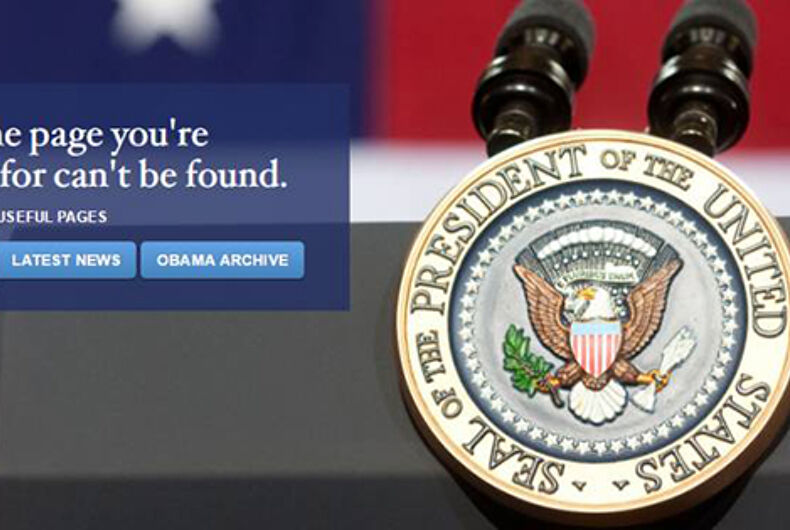 Yet another website run by the Trump administration is dragging a key moment in LGBTQ history to the trash.

On the heels of our report that officials running the White House website have removed everything that celebrates, honors, or even mentions lesbians, gays, bisexual, transgender or queer Americans, now the State Department has scrubbed former Secretary of State John Kerry’s apology to the community for the witch-hunts that cost up to 1,000 government employees their jobs, simply because they were LGBTQ.

As is the custom of every new administration since Bill Clinton debuted the White House’s website in 1994, the apology and the original Obama White House site aren’t completely gone; they have been archived.

But the Human Rights Campaign, among others, saw the deletion of Kerry’s landmark apology to the LGBTQ community as “outrageous,” as HRC president Chad Griffin said in a statement.

“It is outrageous that the new administration would attempt to erase from the record this historic apology for witch hunts that destroyed the lives of innocent Americans,” Griffin said. “The apology, along with the other important LGBTQ content that has been removed, should immediately be restored, and President Trump should condemn such behavior at all departments and agencies.”

Sen. Ben Cardin, whose November letter to John Kerry about the so-called Lavender Scare sparked Kerry’s apology, denounced the State Department’s attempt to “turn back the clock.” In a statement to NBC OUT, Cardin said:

“This is alarming to me. I encourage the Administration to make its public information portals reflective of all Americans and our values, and I will be monitoring this closely. We cannot and will not turn back the clock on the hard-fought civil rights of the LGBT community. Instead we must strengthen and expand them. I am continuing to ready legislation to compel the State Department to review its actions during the Lavender Scare and make amends.”

Lambda Legal CEO Rachel Tiven told the Washington Blade that considering who Trump selected for his cabinet, this isn’t as shocking as it might seem to some: “Donald Trump has already nominated a startlingly antigay cabinet, and erasing us from the White House website signals how he truly feels about LGBT people and everyone living with HIV,” Tiven said. “Donald Trump is already sending a clear signal that he has no intention of serving as the president of all Americans.”

But although LGBTQ content was scrubbed from some federal agency websites, including a Labor Department report titled “Advancing LGBT Workplace Rights,” other LGBTQ-focused web pages are still online. For now.

LGBTQ Nation will monitor these sites and update you should that change.