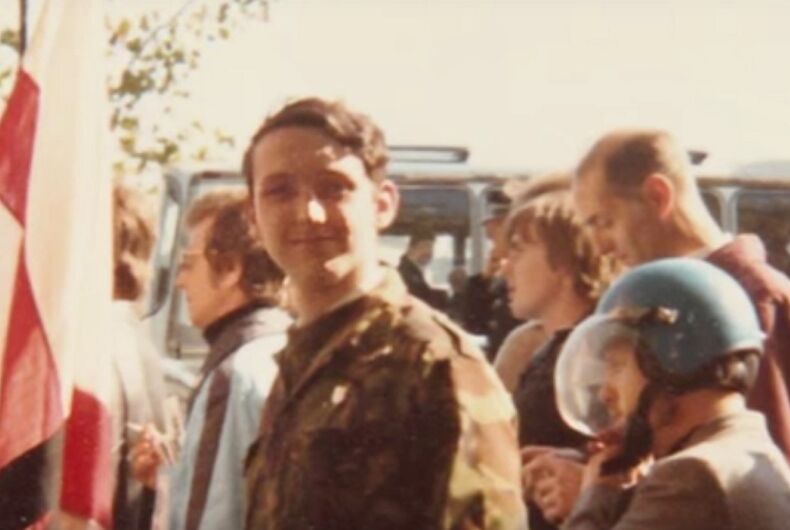 A prominent English neo-Nazi who has been involved in neo-Nazi activism for 40 years came out as gay.

Now Kevin Wilshaw wants to get out of the far-right movement.

“It’s a terribly selfish thing to say, but it’s true,” he said in an interview with Channel 4 News. “I saw people being abused, shouted at, spat at in the street. It’s not until it’s directed at you that you suddenly realize that what you’re doing is wrong.”

Hate started at a young age

Wilshaw said that he was first attracted to Nazism as a child growing up in a rural area of northern England. “I must’ve been about 11-years-old. My father was very right-wing, and I think I took it a bit further than him,” he said.

His father was also abusive and young Kevin had few friends his age. He said that Nazism gave him a sense of camaraderie that he didn’t get elsewhere.

As a teenager, he joined the National Front, a fascist political party in the UK. He became a regional organizer for the party at age 20. In the 80’s he was a prominent organizer for the far-right and was a member of the British National Party (BNP).

Wilshaw also joined the World Union of National Socialists, despite his mother’s Jewish heritage. He wrote on his application, “I am of the opinion that the war against the enemies of my race needs to be waged on a global scale to be effective.”

In the early 90’s, Wilshaw, whose sister married a Muslim man, was arrested for vandalizing a mosque. His wife left him, saying that Adolf Hitler was “the other man” in their relationship.

After that, he was mostly working with the BNP. He attended rallies and then took his hatred online, using social media to disseminate his views.

Earlier this year, he was found guilty of inciting hate online. He is currently out on bail and awaiting sentencing.

A Nazi with a Jewish mother

Wilshaw said that his mother was part-Jewish. In Europe, “Jewish” is often seen as an ethnicity or a race, not as a religion, and Wilshaw does not say whether his mother was religious or whether her mother was Jewish.

Either way, she was seen as Jewish by herself and others. Wilshaw’s abusive, right-wing father would often call his wife “Rachel” – a common Jewish first name – to insult her.

As a teenager, he was getting progressively more involved with Nazism, and he recounted an incident where his mother called him out.

During one episode in the family home in the 1970s and as Kevin was immersing himself in far-right politics and Nazism, his mother had screamed at him that “those people” would have killed her, for being Jewish. He never responded.

Just like with his sexuality, he compartmentalized. “That term ‘the Jews’ is the global faceless mass of people you can’t personalize it, not individuals,” he said. “That’s the generalization that leads to six million people being deliberately murdered.”

As an adult, he stayed in the same rural area he grew up in, but his activism meant that he would often travel to larger cities in England. So in addition to the feeling of belonging that he craved, those frequent trips gave him a chance to go to gay bars and clubs.

“I went to a lot of gay clubs on my own, but there has always been a thriving gay scene in the far right as long as you don’t get caught or talk about it. I never did. I never told anyone. In the early ’80s, the [National Front] used to hold these little ‘parties’ for gay members, but I never went.”

He married a woman in 1993 and had a son, but it didn’t last. “My ex-wife knew I was gay. She came to some clubs with me after the marriage began to break down to try and help me deal with it, but obviously I found it very, very difficult to confront or admit it openly.”

Fear of being found

He switched factions within the BNP during the 90’s because he started hearing rumors that other people knew that his mother was Jewish. He was also dogged by rumors about his sexuality, at one point even being attacked by other Nazis.

During this time, there were rumors about other Nazis who were gay, like Ian Anderson. As a National Front organizer, Anderson gave a speech in London where he said that HIV/AIDS was “a bloody good thing” because it killed gay people.

Wilshaw clapped during Anderson’s speech, and then went to a gay bar that night.

He also knew about self-identified Nazi Nick Crane, who was called a “Panzi” by The Sun and who came out as gay and HIV-positive just before passing away in the 90’s.

“Crane was good to other gay Nazis. He kept your secrets. He could get you into clubs where he worked on the doors. Deep down I think everyone knew he was gay. There was just no one big enough to take their problems with it up with him personally. So they all ignored it. What made it easier for them to forgive him was his incredible size. He was built like a monster, and incredibly violent with it. He had to be accepted.”

In 2015, the year his mother died, he went to local pubs a few times wearing a Nazi uniform. His hatred became more virulent at rallies and online.

Matthew Collins of Hope Not Hate, an organization that tracks far-right extremism in the UK, said that Wilshaw became so unhinged that “we actually queried if he was having a nervous breakdown.”

Here’s Kevin Wilshaw from Aylesbury getting ready for Hitler’s birthday next month… pic.twitter.com/tYYqzbOKbd

But Collins also pointed out that Nazis usually get very intense just before they leave the movement. And that’s what Wilshaw did, calling Hope Not Hate and asking for help to get out.

It was at Christmas last year that he decided to leave. “Everything was just feeling so empty and so pointless but I just had no idea how I could walk away from these people, these degenerate Nazis,” he said. “What sort of life is this, for fuck’s sake?”

“I feel guilty,” he said. “I feel appallingly guilty.”

As he’s waiting for sentencing from his conviction for inciting hate earlier this year, he sometimes goes to a local rabbi to talk about his life and his mother.

He is also concerned about his son, who he is just now coming out to. “The only one who matters who does not know is my son.”

“I think this will be as much of a relief to him as it will be for me,” he said, referring to leaving the Nazi movement.

Obama has chosen a gay artist to paint his official portrait

That time in 1979 when 100,000 LGBT people took over Washington to demand civil rights