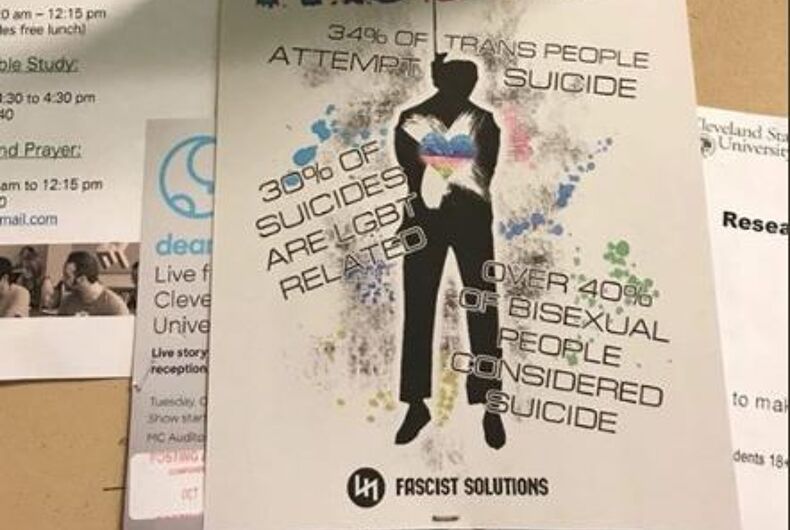 Hate fliers telling members of the LGBTQ community to commit suicide were posted on the Cleveland State University campus on the same day it opened its first LGBT center.

The fliers include incorrect suicide statistics and say, “Fascist Solutions” on the bottom. Another flier posted next to it appears to be a white supremacist flier.

“Follow your fellow faggots,” it reads at top, in rainbow letters, inciting a community that already suffers from higher than average rates of depression, self-harm, and suicide to kill themselves.

The Queer Student Alliance said school officials had taken the fliers down and were looking into was responsible.

The university released the following statement:

At Cleveland State University, our foremost priority is maintaining a welcoming environment that provide opportunities for learning, expression and discourse.

CSU remains fully committed to a campus community that respects all individuals, regardless of age, race, color, religion, national origin, sexual orientation and other historical bases for discrimination.

CSU also is committed to upholding the First Amendment, even with regard to controversial issues where opinion is divided. We will continue to protect free speech to ensure all voices may be heard and to promoste a civil discourse where educational growth is the desired result.

Be assured that a spirit of inclusiveness will always be central to the very identity of our University.

Students and alumni are speaking out on social media, criticizing Berkman’s response.

Hey @CLE_State. This is a hate crime, not free speech. Thank you for making me feel unsafe at school. pic.twitter.com/kOE4aLAGn9

I love that these photos went up at my university Cleveland State University& the President's response was to say "First amendment rights" pic.twitter.com/0pu0tspRnh

Embarrassed to be a @CLE_State alumni today. @PresBerkman should know hate speech is NOT protected under 1st Amend https://t.co/5zxFIvd5ij

Conservative group Turning Point USA has been blamed by some for posting the flier, but has denied this accusation.

The flier encouraging suicide was also found at a bus station in Houston earlier this year.