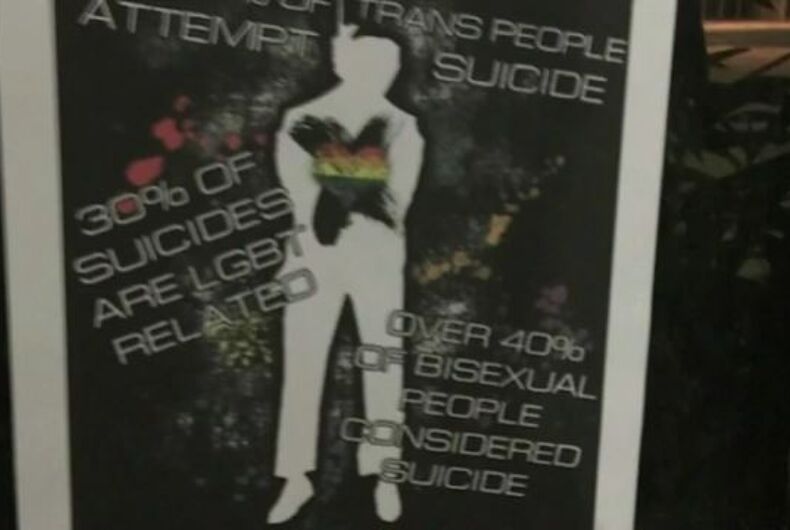 A hateful flier found at a bus stop in Houston. Photo: Screenshot, Click2Houston

A flier posted at a bus stop in Houston, Texas encouraged LGBTQ people to commit suicide.

It featured a picture of a person with a rainbow heart on their chest hanging from a noose, along with unsourced suicide statistics related to the LGBTQ community, encouraging others to do likewise.

“Follow your fellow faggots,” the flier said. It also featured a logo at the bottom, along with the words “Fascist Solutions.”

A man took a picture of the flier and sent it to OutSmart Magazine. He said there was another flier posted at the bus stop, which is at Westheimer and Stanford in Montrose, calling for “racial purity.”

“Needless to say, it was a little unsettling,” the man, who is African American said. He told OutSmart that he didn’t tear the fliers down because he was afraid someone might be watching.

“I was scared and very rattled, especially with all the other things going on in the country right now,” he added. “These fliers could be the beginning of something else.”

“Bottom line, if there is something offensive like that, we just need to know about it,” said Laura Whitley, a spokeswoman for Metro.

Whitley encouraged people to contact the agency’s customer care center at 713-635-4000 if they see anything of a similar nature in the future.

The Montrose Management District is shocked and dismayed by recent discoveries of anti-LGBT materials posted around Montrose. The District is working closely with law enforcement officers to uncover those responsible for defacing public property and deliberately attempting to antagonize members of our community. We will use every available legal remedy to hold perpetrators responsible and discourage future acts.

The Montrose Management District condemns hate speech of any kind and is dedicated to protecting the diversity, vibrancy and sexual identity and orientation of individuals who live, work and visit our community without question or prejudice. We view our charter of enhancing and promoting the commercial interests of business owners as being intertwined with protecting the rights and liberties of our proudly diverse community.

Montrose is a unique and cherished part of the City of Houston. Our community’s identity is based on individual freedoms and the opportunities for our citizens to pursue life on their own terms. The Montrose Management District stands with our friends and neighbors against any efforts to threaten or alienate a minority or group.

Please report any incidents of hate speech, whether in person or through signage, to the Houston Police Department at 713-884-3131.

Can using meth regularly give you a mental illness?