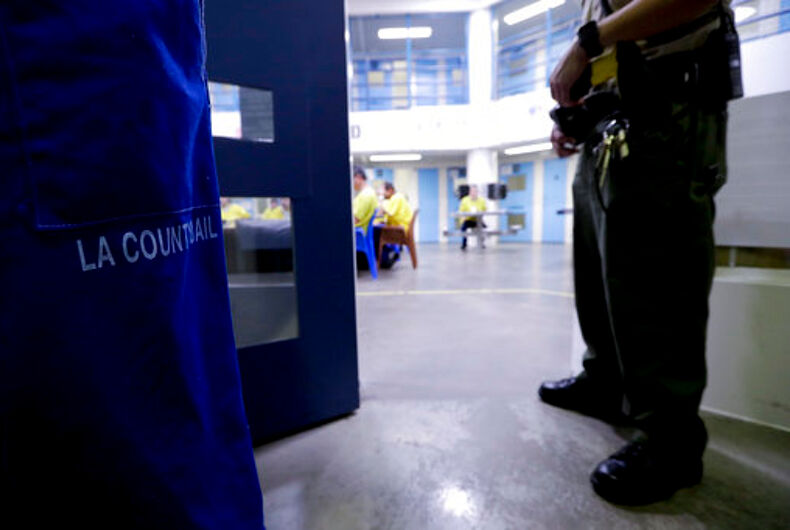 A Sheriff officer stands guard over inmates at the Twin Towers Correctional Facility Thursday, April 27, 2017, in Los Angeles. One of the world's largest jail complexes is located in Los Angeles and within it resides perhaps the world's largest group of inmates whose mental illness is attributed to drug abuse, mainly from highly addictive methamphetamine. Photo: (AP Photo/Chris Carlson)

Over the past seven years, Los Angeles jail officials have seen a nearly 50 percent increase in the number of mentally ill inmates, a rise the sheriff attributes to methamphetamine use.

Studies show chronic meth use can cause paranoia, visual and auditory hallucinations and delusions. But doctors say it’s often difficult to determine whether patients had underlying conditions and then started abusing drugs, or if their chronic drug use led to psychiatric disorders.

Los Angeles sheriff’s officials, who house close to 4,000 mentally ill inmates in one facility alone, are working to adapt policies and train deputies to de-escalate tense situations and work with clinicians and other mental health professionals to treat people who have both psychiatric disorders and substance abuse problems.

Here’s a look at the correlation between chronic meth use and diagnosed mental illness.

WHAT ARE THE EFFECTS OF CHRONIC METHAMPETAMINE USE?

In addition to psychiatric symptoms, like paranoia and hallucinations, chronic meth users can experience anxiety, confusion and violent behavior, according to the National Institute on Drug Abuse.

The hallucinations often mimic the symptoms of a schizophrenic episode, and some users also have homicidal or suicidal thoughts, said Dr. Rana Biary, a toxicologist at the NYU Langone Medical Center.

CAN METH USE CAUSE SOMEONE TO DEVELOP A MENTAL ILLNESS?

“Absolutely,” says Dr. Joel Braslow, a professor of psychiatry and biobehavioral sciences at the University of California, Los Angeles.

“Heavy, high use of methamphetamine can cause psychotic symptoms,” he says.

It is also known to exacerbate symptoms for people with underlying psychotic disorders, he said. But Braslow says it is “too easy” to blame methamphetamine use for a rise in the number of mentally ill inmates. It’s extremely difficult to distinguish between those who abuse drugs, causing psychiatric symptoms, and patients who turned to drugs because they feel better when they are high, he said.

WHAT DOES CHRONIC METH USE DO TO THE BRAIN?

Neuroimaging studies have shown chronic methamphetamine users sometimes have structural and function changes in the parts of the brain that are associated with emotion and memory, according to the National Institute on Drug Abuse. Those changes can cause emotional and cognitive problems.

HOW DO DOCTORS KNOW IF SOMEONE HAS MENTAL ILLNESS BROUGHT ON BY SUBSTANCE ABUSE OR IF THEY ALREADY HAD AN UNDERLYING DISORDER?

Experts say that’s one of the most challenging things when dealing with patients who have mental illness and are struggling with substance abuse.

“Almost everyone who uses meth will tell you initially they didn’t do it to get high. They did it to level out and feel normal,” said Dr. Jeffrey Reynolds, who specializes in substance abuse and addiction disorders. “In the case of meth, you will hear people say, ‘I started using because it made the voices go away.'”

WHAT OTHER EFFECTS DO CHRONIC METH USERS EXPERIENCE?

Those who use methamphetamine for long periods can also suffer weight loss, severe tooth decay and tooth loss. Chronic users also sometimes have skin sores from picking and scratching at their skin, which experts say often is because the users are trying to get rid of insects they imagine are crawling under their skin.