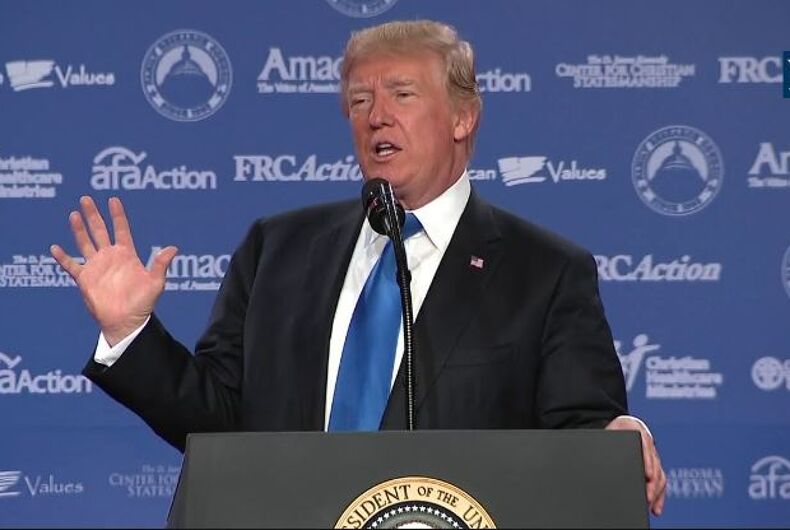 The Christian right has a new plan for halting transgender rights progress, and it is perhaps their most dishonest move yet.

In short, they want to separate out the T from the LGBTQ community, in a “divide and conquer” move, reports Right Wing Watch.

It was the latest in a long line of signs that the Trump administration was not on our side, including arguing that LGBTQ people should be able to be fired for being who they are, that transgender people shouldn’t be allowed to serve openly in the military, and that the rainbow pride flag should never fly on federal lands.

The gathering of right wing religious types included a host of anti-LGBTQ and anti-Muslim speakers, as well as swag bags full of homophobic and transphobic literature.

The ideas presented from stage were just as dangerous as those found in their propaganda gift bag.

“For all of its recent success, the LGBT alliance is actually fragile, and the trans activists need the gay rights movement to help legitimize them,” said Meg Kilgannon, a parent and director of Concerned Parents and Educators of Fairfax County, during a panel discussion called “Transgender Ideology in Public Schools: Parents Fight Back.”

Seeming to understand how far public opinion has moved on LGB rights, Kilgannon suggested that trans rights was still a battlefield where they could win.

The group has named the FRC a hate group for their anti-LGBTQ views.

“Gender identity on its own is just a bridge too far. If you separate the T from the alphabet soup, we’ll have more success,” Kilgannon added.

She compared allowing teenagers to transition with “the 1950s lobotomy fad in psychiatry.”

Attendees were also told to wrap their transphobic rhetoric in the language of feminism, claiming gender identity is a concept offensive to women.

Other tips included: No personal attacks on the LGBTQ community, since it’s ineffective (except on politicians who vote for transgender rights); Use secular, not religious, arguments; Run for school board.

The rest of the panel, consisting of FRC’s Peter Sprigg, Elizabeth Schultz, a member of the Fairfax County school board, and Josh Hertzler of the Family Foundation of Virginia, also argued that transgender rights were a danger to students.

“In essence,” said Hertzler, “what we’re experiencing is a full scale attempt to short-circuit the democratic process, right, of passing laws through the power of persuasion that reflects society’s values, substituting civil order and the rule of law with the will of a few judges and bureaucrats.”

Sprigg, the SPLC noted, urged attendees to get a copy of FRC’s brochure, “A Parent’s Guide to the Transgender Movement in Education.”

It includes the following, which is a good representation of the whole: “Although the lifestyles and interests of self-identified lesbian, gay, bisexual, and transgender persons are often very different, they have united in a movement to attack natural views of sexual morality and sexual identity.”

Precedent for the “drop the T” movement at Breitbart

This is a move that has also been pulled by Milo Yiannopoulos, the former Breitbart editor who was forced to resign after comments he made appearing to condone pedophilia surfaced, wrote that the LGB community should leave the T behind in an article dating back to 2015.

Yiannopoulos also regularly refers to transgender people with a slur, and says they are mentally ill, a claim that is a dangerous misrepresentation.

The FRC has previously hosted this same panel, including back in May, which you can watch below.