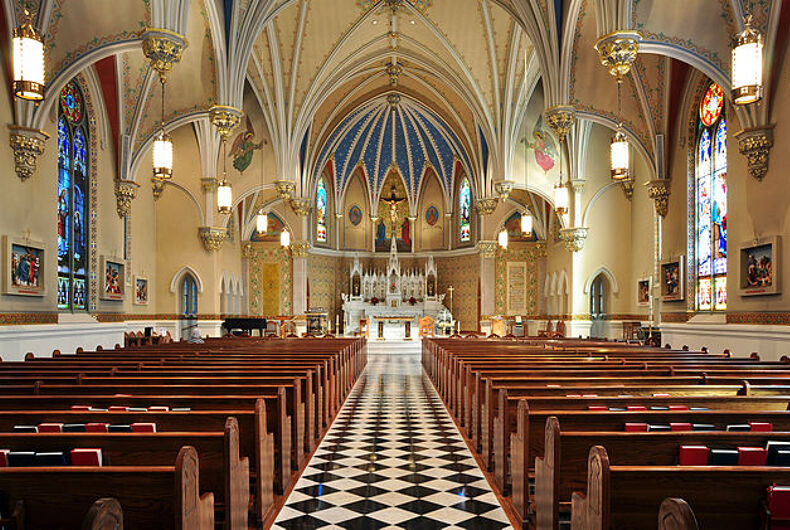 The interior of a Catholic church in Virginia.Photo: Joe Ravi

New directive show priests in Madison, Wisconsin have been instructed to consider denying Catholic funerals to LGBTQ people, in order to avoid “scandal and confusion.”

The leaked directive, published by Pray Tell, is titled “Consideration of Funeral Rites for a Person in a Homosexual Civil or Notorious Union.” What is found inside is just as repellent as that heading would lead you to believe.

“To minimize scandal, should there merely be a short scripture service at the funeral home? Or maybe merely a graveside service? Maybe a later ‘Mass for the Dead’ with or without explicit mention of the name of the deceased or ‘partner’ could alternatively or in addition be offered at the parish or even at another parish (to avoid scandal), with or without family members present,” the directive reads.

The entire document is heavy on the whole “avoiding scandal” angle, in keeping with the Catholic Church’s tendency to err on the side of destroying innocent lives over possibly looking bad in the public eye. It’s a strategy that has only worked if their goal is to get more room in those once crowded pews.

If it does deem a queer person worthy of a funeral, they must have repented for their supposedly sinful “lifestyle,” and the partner “should not have any public or prominent role” in the proceedings. Nor should they be listed “either by name or by other reference (nor reference to the unnatural union) in any liturgical booklet, prayer card, homily, sermon, talk by the priest, deacon, etc…”

The communication came in the form of an email from vicar general Fr. James Bartylla, and was attributed to Madison Bishop Robert Morlino. The diocese issued a statement saying “the communication attributed to Bishop Morlino was not an official diocesan policy, though it does conform with the mind of the bishop and meet his approval.”

“This document is the very antithesis of pastoral care,” said Marianne Duddy-Burke, executive director of DignityUSA, an organization that focuses on LGBTQ rights and the Catholic church, NCR reports.

“It shows that this bishop believes that lesbian and gay people who have lived a deep commitment to a spouse or partner should be demeaned even in death,” she added. “Our families could be refused the sacraments of our faith at the moment of their greatest grief.”

A similar directive was sent by a Catholic bishop in Illinois. In both cases, Canon 1184 from the Code of Canon Law was cited. It states that “manifest sinners” should not be given Catholic funerals unless they have repented before death.