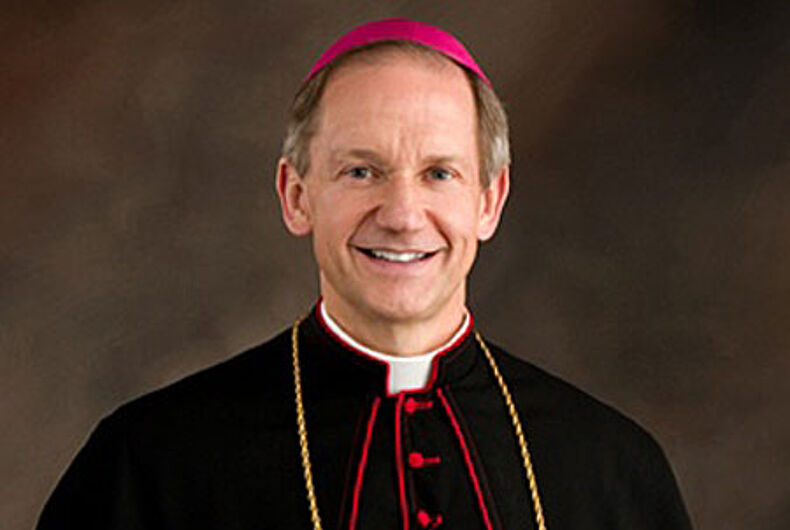 A Catholic bishop in Springfield, Illinois, issued a decree to priests in his diocese to deny communion, last rites, and funeral rites to people in same-sex marriages.

Bishop Thomas Paprocki issued the decree this past week, arguing, “A reversal of millennia of legal and judicial recognition of the marital union as possible only between one man and one woman, same-sex ‘marriage’ is now recognized by legislative action and judicial decision as legal throughout the United States of America.” The legal climate created the “serious obligation” to “affirm” the Catholic Church’s opposition to marriage between members of the same sex.

People married to someone of the same sex “should not present themselves for Holy Communion, nor should they be admitted to Holy Communion,” the decree states.

This includes a person facing death, who have to express “repentance for his or her sins” before receiving last rites. Funeral rites, too, should be denied, “unless they have given some signs of repentance before their death.”

According to observers, the move is extreme. “The only time I can remember someone being denied a funeral were mafia bosses, when they were shooting at each other,” Michael Sean Winters, a columnist at National Catholic Reporter, told NPR.

The website of the Archdiocese of Detroit says that funeral rites can only be denied to “apostates [people who renounce Catholicism], heretics and schismatics [people who promote schism within the Catholic Church], and those who are such notorious sinners that providing the funeral rites would cause scandal.” Gay and bisexual people are not necessarily in the first three categories, so Paprocki probably drew justification from the last.

Christopher Hale, who maintains a site for Catholic millennials, said, “No one goes to the grave without sin. The notion that a murderer could receive a Catholic funeral and someone in a same-sex union could not is absurd. … Every Catholic deserves a Catholic funeral.”

This is not the first time Paprocki has gotten media attention. In 2012, he publicly said that voting for Democrats puts “the eternal salvation of your own soul in serious jeopardy.” In 2013, he held an exorcism when Illinois enacted marriage equality.

Pride, in all its glory