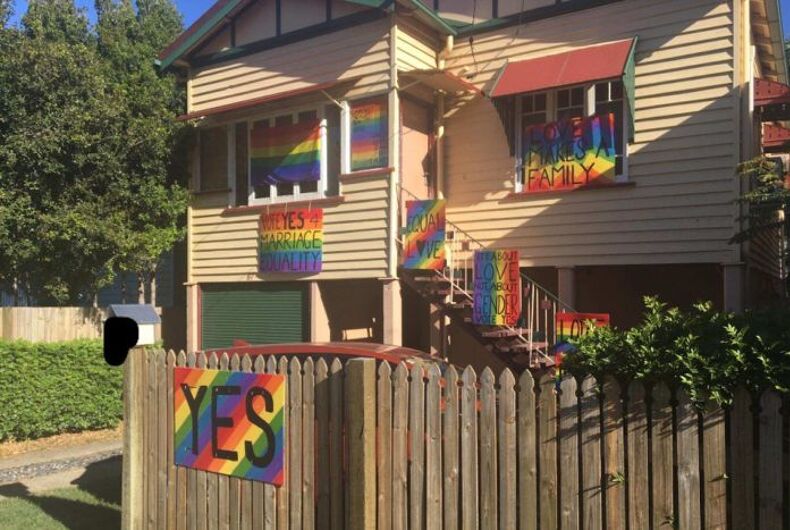 A woman in Brisbane with signs on her home voicing support for marriage equality in Australia reports that her home was pelted with rocks by a homophobic man.

Olivia Hill, 22, was home alone Sunday night when she heard rocks hitting her house around midnight, shattering two windows, according to ABC News.

“I heard this man yelling, ‘what the fuck is this shit?'” Hill said. “I thought ‘This is how I die — I die at the hands of this homophobe that is outside my house right now’.”

She called the police and a friend came over to stay with her while she waited for them to arrive. She only caught a glimpse of the man.

Police report that four other homes and businesses in the area with rainbow flags were also vandalized over the weekend, with swastikas spray painted onto homes and across a rainbow flag.

Hill, who is bisexual, said there had been the occasional angry remark shouted at her house from a passing car, but that this past weekend’s violence stood alone.

She said that the postal survey being held by the country to help determine if parliament will take up the issue of marriage equality has brought out the worst in some people. This is a concern that many echoed in an attempt to prevent the government from calling for a survey, instead of deciding the issue without one.

Anti-LGBTQ fliers, full of hateful and inaccurate messages about queer people, have popped up in major Australian cities.

In more amusing news, one of the groups responsible for posting the bigoted fliers recently held a “Straight Lives Matter” rally and almost no one came.

Australians have until November 7 to get their surveys in, and results will be published November 15.

Hill said she is undeterred in her mission to show support for equal rights.

“A broken window isn’t going to break our spirits and we are still going to leave our signs up there and keep campaigning for ‘yes,’ and we’re going to keep on fighting,” she said.