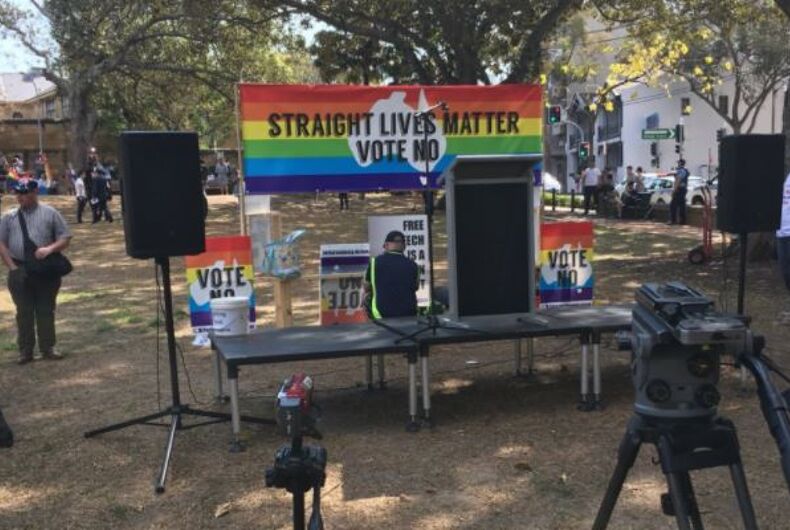 What if you held a rally in basically nobody came?

A minor Australian political party opposed to marriage equality held a “Straight Lives Matter” rally in Sydney and almost no one came.

The Party For Freedom, whose website displays the slogan “Make Australia Great Again!” in a nod to U.S. President Donald Trump, set the event in Darlinghurst, an area known to have a large LGBTQ population. This was no coincidence, as the page on Party For Freedom’s website advertising the rally calls Darlinghurst “the heart of rainbow territory.”

“There are many Australians who feel excluded from the current debate on same sex marriage due to the militant group think tactics used by homosexual marriage activists in intimidating and shaming those who do not support the latest cultural Marxism fad to redefine traditional marriage. This rally will give supporters of traditional marriage an opportunity to band together in solidarity and speak out against the proposed legalization of same sex marriage,” Party For Freedom stated.

Turns out, there weren’t too many people there to “band together.” Only about 30 showed, according to Gay Star News.

One of the speakers at the event was Cat Clayton, introduced as the person responsible for the “Vote No” skywriting that appeared above Sydney. Clayton told the meager few in attendance to “keep your eyes on the skies,” promising another skywriting message will appear in the near future.

Australians are participating in a nationwide, non-binding postal survey on marriage equality to determine whether parliament will take up the issue, although even if a majority vote yes, it is still under no obligation to do so.

LGBTQ rights advocates had asked the government to decide on the issue without a survey, as polls already show strong support for marriage equality in the country, and they feared the debate would stir up anti-LGBTQ anomosity.

That proved true, as anti-LGBTQ fliers have popped up on the streets of Australian cities.

And as it so happens, Party For Freedom “activists” are responsible for posting some of those bigoted posters, bragging about the fact on its website.