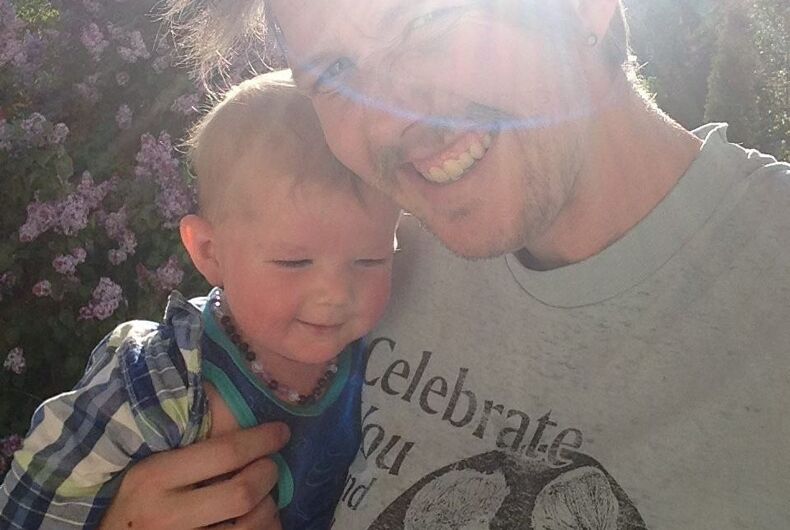 Kori Doty wants their child to be raised free from gendered expectations.Photo: Via Facebook

When babies are born in Canada — as in the United States — doctors assign them a sex based on their external genitalia and cement that assignment by recording it on the child’s birth certificate with an M or F.

But one parent is fighting back against what they call an unnecessary, inaccurate, and potentially harmful practice.

Kori Doty, a Canadian parent who identifies as trans and nonbinary, is fighting with British Columbia officials to keep a sex marker off of their eight-month-old Searyl’s birth certificate as part of a larger effort to remove sex/gender markers from identity documents.

“I’m raising Searyl in such a way that until they have the sense of self and command of vocabulary to tell me who they are, I’m recognizing them as a baby and trying to give them all the love and support to be the most whole person that they can be outside of the restrictions that come with the boy box and the girl box,” Doty told CBC.

The province has so far refused to issue a birth certificate without a gender listed, as it is currently set up to accommodate only “male” and “female” designations. While some Canadian provinces are currently considering the addition of a third gender option — as both Oregon and Washington, D.C. have recently done — Doty has filed a legal challenge arguing for the need for a certificate without any listed sex or gender.

Doty is a member of the Gender-Free ID Coalition, a group working to end the practice of including gender markers of government-issued identity documents.

It’s not just a political fight, but a practical one. As Doty explains to CBC, the visual assessment made by doctors at birth cannot accurately determine sex or gender, since intersex conditions are not always immediately apparent and a child’s self-determined gender may be different than what doctors assume based on their genitalia.

Doty can relate to this experience personally as a nonbinary person.

“When I was born, doctors looked at my genitals and made assumptions about who I would be, and those assignments followed me and followed my identification throughout my life,” Doty said. “Those assumptions were incorrect, and I ended up having to do a lot of adjustments since then.”

While Doty awaits their judicial review, they are busy raising a happy and curious human. Check out the video below of the baby Sea learning about the natural world, and the magic of dandelions that have gone to seed.

Meet the gay man who won America her independence

Finally: A place for our aging, lonely elders in NYC