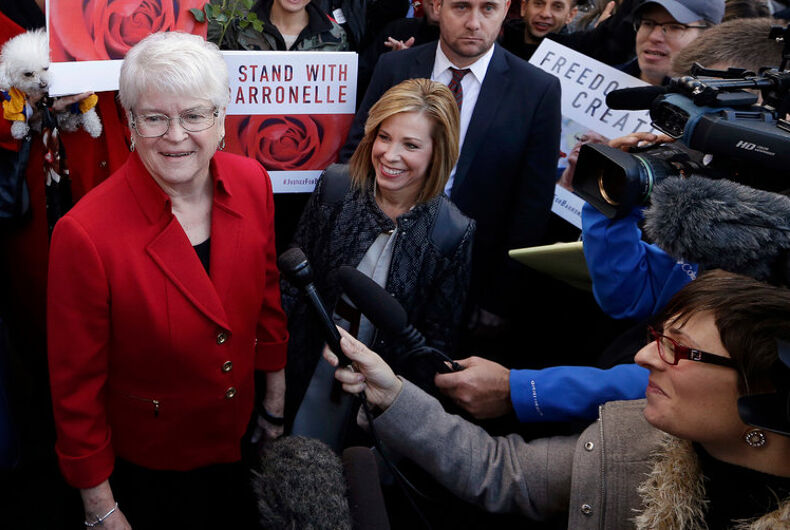 A florist in Washington who refused to provide flowers for a same-sex wedding is appealing to the U.S. Supreme Court in hopes it will grant her the right to discriminate in the name of religion.

Barronelle Stutzman, owner of Arlene’s Flowers, refused to provide flowers for a gay couple’s big day, despite having done business with them in the past and claiming to have viewed them as friends.

Related: After 2 years of marriage equality Republicans are still trying to destroy it

The Washington Supreme Court ruled unanimously in February that Stutzman had violated the state’s nondiscrimination law, and fined her $1,000. The court found no basis to the argument that providing flowers for a same-sex wedding constituted an endorsement of same-sex marriage.

Still, Stutzman is not satisfied, and, as the Washington Blade reports, filed the petition to the court on Friday before the U.S. Supreme Court, asserting that the rulings against her violate her freedom of speech and religion.

“The state is trying to use this case to force me to create artistic expression that violates my deepest beliefs and take away my life’s work and savings, which will also harm those who I employ,” Stutzman said in a statement. “I’m not asking for anything that our Constitution hasn’t promised me and every other American: the right to create freely, and to live out my faith without fear of government punishment or interference.”

The Supreme Court has agreed to hear a similar appeal by a Colorado baker, Jack Phillips, owner of Masterpiece Cakeshop, who refused to make a wedding cake for a same-sex couple. Legal firm the Alliance Defending Freedom is representing both Stutzman and Phillips. It has been designated a hate group by the Southern Poverty Law Center for its anti-LGBTQ stances.

The petition on behalf of Stutzman asks for both cases to be heard simultaneously, or for her case to be held until after a decision can be reached in the Masterpiece Cakeshop case.

“If the government can ruin Barronelle for peacefully living and working according to her faith, it can punish anyone else for expressing their beliefs,” Alliance Defending Freedom senior counsel Kristen Waggoner said in a statement. “The government shouldn’t have the power to force a 72-year-old grandmother to surrender her freedom in order to run her family business. Anyone who supports the First Amendment rights that the U.S. Constitution guarantees to all of us should stand with Barronelle.”

Both cases were among the first to lodge a challenge to marriage equality on the basis of “religious freedom,” setting up a legal battle that will help determine whether conservatives will successfully hollow out marriage equality until it is little more than the ceremonial granting of a useless piece of paper.

Attorney General Jeff Sessions recently spoke to the Alliance Defending Freedom at their religious freedom summit, where he thanked them for the work they do and promised that a Department of Justice guidance on so-called “religious freedom” was on the way.

We only have those remarks because a conservative media outlet published them, after the DOJ refused to release them or comment on the fact that Sessions was appearing at the summit.

On the same day the Alliance Defending Freedom filed the petition on behalf of Stutzman, it released a video called “The Barronelle Stutzman Story.”

It’s heavy on the ‘Aw, shucks, she’s just a sweet old grandma who loves everyone’ vibe, in hopes you won’t focus on how this could set a dangerous legal precedent allowing for widespread discrimination at the whim of anyone’s interpretation of their religion’s teachings.

And if you think that can only be used against LGBTQ people, flip through your favorite religious text sometime while imagining the possibilities.

Messaging 101: What do the Democrats actually stand for?