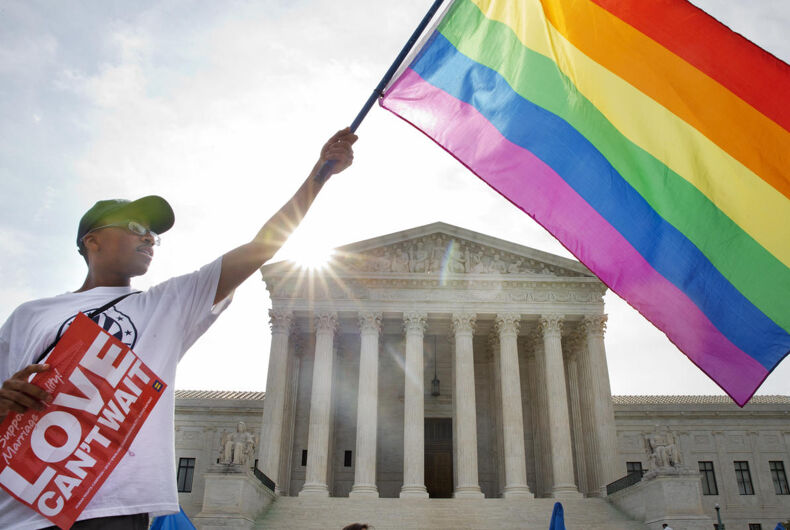 This week the U. S. Supreme Court announced that in the fall it will hear the case Masterpiece Cakeshop v. Colorado Civil Rights Commission. The case – which will have many LGBTQ Americans on pins and needles – will argue the parameters of one’s right to practice their religion and their right to express themselves freely.

In 2012, gay couple David Mullins and Charlie Craig wanted to order a cake for their upcoming wedding reception. With plans to marry in Massachusetts because same-sex marriage wasn’t legalized in Colorado until 2014, the couple decided to celebrate their nuptials back home. Jack Phillips, owner of Masterpiece Cakeshop, informed the couple that because of his religious views he doesn’t provide cakes for same-sex weddings.

“We do a variety of cakes. We do birthday cakes and shower cakes. We don’t do Halloween cakes and adult-themed cakes,” Phillips stated in the New York Times.

Many conservatives in Phillips’s camp argue that his position is not a repudiation on same-sex marriage but rather it’s a principled stance to fight for free expression unfettered by the tyranny of political correctness.

“We at Cato have long supported both religious liberty and gay rights, insofar as the agenda of each is consistent with the liberty of unlimited constitutional government,” Roger Pilon, founding director of the Cato Center for Constitutional Studies, said. “But we draw the line when same-sex couples turn around and use government to force venues against their religious beliefs to participate in same-sex ceremonies, as happens too often today.”

Oddly, however, when the argument is framed as Pilon states there’s no room to ensure that LGBTQs will not be discriminated against because of who we are and who we love. And I’m not certain that this government has our back.

As a matter-of-fact, since Trump has taken office I’ve worried about the erosion of LGBTQ civil rights. In February his administration revoked federal guidelines permitting transgender students from using facilities that aligned with their gender identity. This June Trump paid tribute to the 49 LGBTQ victims of last year’s Pulse nightclub massacre, but failed to issue a proclamation for Pride Month.

I am immensely thankful as a married lesbian that I reside in Massachusetts, especially if Trump tries to overturn Obergefell v. Hodges, the historic U.S. Supreme Court ruling that legalized same-sex marriage in all 50 states. With Trump potentially filling three Supreme Court seats with Antonin Scalia-like justices I can exhale knowing that the Massachusetts Supreme Judicial Court legalized same-sex marriage in the 2004 Goodridge v. Dept. of Public Health landmark case, and it’s sticking.

However, that may not be the case for many LGBTQ married couples outside of Massachusetts. For example, in a Trumped-up Supreme Court there is talk among Christian evangelicals of walking Obergefell v. Hodges back without disrupting other precedent on marriage,” Rebecca Buckwaler-Poza wrote in the article “The End of Gay Rights” in the June issue of Pacific Standard Magazine.

“The Supreme Court can significantly undermine LGBT rights even without reversing a single case. Right now, the federal prohibition against sex discrimination doesn’t bar discrimination on the basis of sexual orientation or gender identity; the Equal Protection Clause affords no specific protections for LGBT people, as it does for members of groups defined by race or nationality. The Court can strip the rights to intimacy and marriage of their meaning, carving away gradually and masking the magnitude of changes by phrasing them in arcane legal terms,” she writes.

A movement has been afoot in state legislatures across the country for some time now to disenfranchise LGBTQ Americans. These bills are called “Religious Freedom Restoration Acts” (RFRA) and are a backlash to the growing acceptance of same-sex marriage and the growing fears of the religious right after the Supreme Court legalized it nationwide. Lawmakers use them to codify LGBTQ discrimination and justify denying us services.

For example, in 2013, a family-owned bakery in Oregon, Sweet Cakes by Melissa, wanted to “practice their Constitutional right to religious freedom.” However, instead of servicing an LGBTQ clientele Sweet Cakes closed the family shop and moved the business to their home to make it clear LGBTQ dollars were not wanted.

“No one should ever have to walk into a store and wonder if they will be turned away just because of who they are,” Mullins told ACLU Colorado.

With Justice Neil Gorsuch newly appointed to the Supreme Court and recent rumors of Justice Anthony Kennedy retiring and Justice Ruth Bader Ginsburg failing to retire during the Obama administration, the ideological balance of the Court is at stake in this uber-conservative Trump administration.

Let’s hope in the fall the Supreme Court does the right thing and does not codify discrimination. Democracy can only begin when those at the margins can experience what others take for granted.