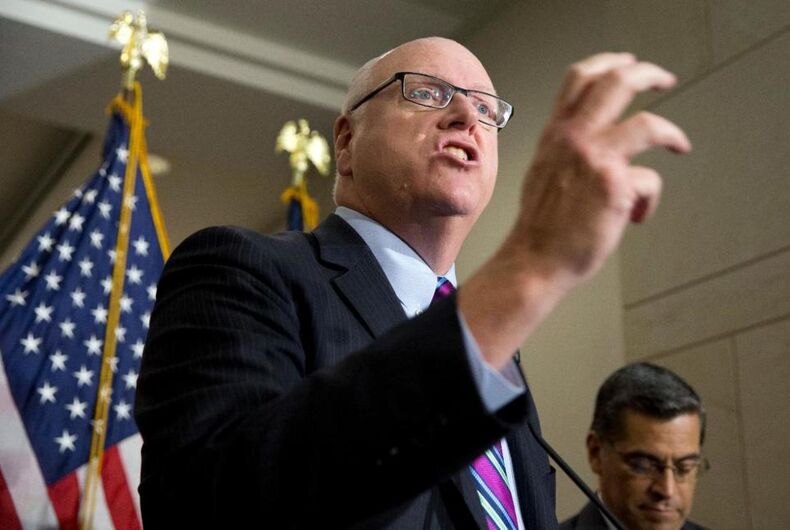 FILE - In this June 22, 2016, file photo, Rep. Joe Crowley, D-N.Y. speaks during a news conference on Capitol Hill in Washington. Republicans are fending off questions about Russia and the Trump campaign, and dealing with an unpopular health care plan. But Democrats have yet to unify behind a clear, core message that will help them take advantage of their opponents' struggles.Photo: (AP Photo/Alex Brandon, File)

“That message is being worked on,” the New York congressman said in an interview this past week. “We’re doing everything we can to simplify it, but at the same time provide the meat behind it as well. So that’s coming together now.”

The admission from the No. 4 House Democrat — that his party lacks a clear, core message even amid Republican disarray — highlights the Democrats’ dilemma eight months after President Donald Trump and the GOP dominated last fall’s elections, in part, because Democrats lacked a consistent message.

The soul-searching comes as Democrats look to flip at least 24 GOP-held seats necessary for a House majority and cut into Republican advantages in U.S. statehouses in the 2018 midterm elections. Yet with a Russia scandal engulfing the White House, a historically unpopular health-care plan wrenching Capitol Hill and no major GOP legislative achievement, Democrats are still struggling to tell voters what their party stands for.

Some want to rally behind calls to impeach the Republican president as new evidence indicates possible collusion between Trump’s campaign and the Russian government. Democratic leaders are reluctant to pursue that approach as it only energizes the GOP base. Others want Democrats to focus on the GOP’s plans to strip health insurance from millions of Americans. And still others say those arguments can be fashioned into a simplified brand.

As Democratic officials debate their party’s message, so do voters across America.

Just 37 percent of adults believe the Democratic Party “stands for something,” according to a Washington Post-ABC poll released on Monday. Another 52 percent said the party “just stands against Trump.”

For now, at least, Democrats are waging a tug-of-war largely between the Russia investigation and the GOP’s attempts to gut the 2010 Affordable Care Act.

Several liberal groups that had been laser-focused on health care have intensified calls for impeachment in recent weeks, including MoveOn.org, Indivisible and UltraViolet.

“We need to be talking about impeachment constantly,” said Scott Dworkin, co-founder of the recently formed Democratic Coalition Against Trump. He warned on Twitter, “If you’re an elected Dem & you’re not talking impeachment or 25th amendment then find a new party.”

Yet one of the left’s favorites, Vermont Sen. Bernie Sanders, is focusing almost exclusively on health care.

Sanders, an independent who caucuses with Senate Democrats, said in an interview that “there should not be a rush to judgment” after emails released by Donald Trump’s son this week revealed that Trump’s top advisers held a meeting with a lawyer they were told represented the Russian government.

Sanders sidestepped questions about impeachment, warning instead that “many, many thousands of Americans” will die every year if the GOP health care plan becomes law. Sanders has hosted swing state rallies focused on health care in West Virginia, Kentucky, Pennsylvania and Ohio in recent weeks and was in Iowa on Saturday.

“Candidates need to be saying the word ‘health care’ five times for every time they say the word ‘Russia,'” Petkanas said. He added, “I think it’s a fundamental mistake to make this election a referendum on impeachment.”

It’s not that easy for some elected officials, like Rep. Joe Kennedy III, D-Mass., who says concerns about Russia have caught up to health care as a priority among his constituents. He described the Russian developments as “a threat to our foundation of democracy” that demands attention.

Many Democrats outside Washington insist they must go beyond opposing Trump and his policies if they expect to make major gains in 2018 and beyond.

“Democrats would make a mistake if we thought pounding Trump and not having an authentic message of our own is a winning strategy,” said Ohio Democratic Party Chairman David Pepper. “The message of Democrats has to be about issues that matter to people at their kitchen table.”

In South Bend, Indiana, Mayor Pete Buttigieg said Democrats don’t have to retreat from their opposition to Trump, including talking about Russia, but they must tie it all together with a consistent theme that goes beyond day-to-day news cycles.

“It’s very simple,” he said. “We exist to help people go about their lives, to protect their rights and freedoms and opportunities.”

Jason Crow, a Democrat running for Congress in a Colorado swing district, said voters regularly ask him about the Russia story, which “goes to the core of our institutions and our faith in government.” But he’s anchoring his pitch on issues that “are real and immediate to people’s lives: going to college, paying the bills, financing a house, whether they can go and get the health care they need right now in an affordable and accessible way.”

Meanwhile, Crowley said voters may have to wait a few more months before they hear national Democrats’ new message.

“We’re all working on that,” Crowley said. “We’re hoping to have this up and running and out by this fall.”