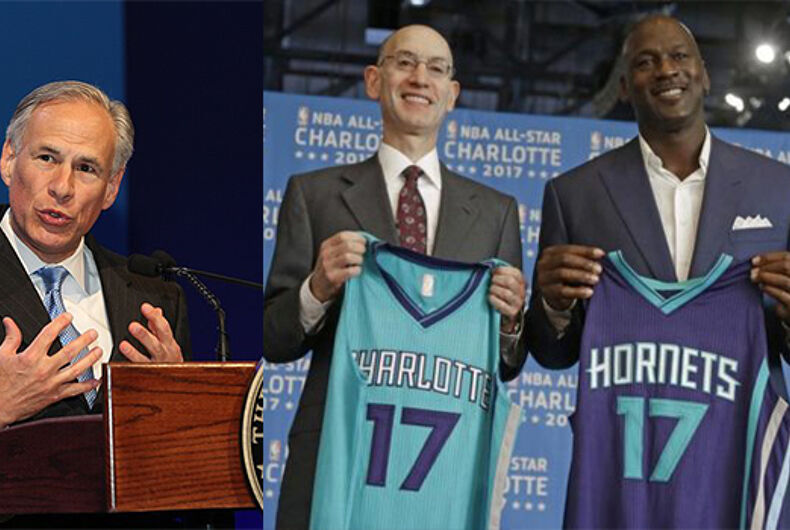 Gov. Greg Abbott has called a special session to address several issues, including trans bathroom use. North Carolina lost the NBA All-Star game in 2017 over the issue, but got it back for 2019 over a bogus compromise. Photo: Abbott photo by World Travel & Tourism Council on Flickr, NBA photo by Chuck Burton/AP

For a brief moment it looked like Republican lawmakers in Texas were finally willing to let go of the foolhardy attempt to go after transgender citizens with a so-called bathroom bill.

The regular session ended without movement on two bills, one in the Senate and one in the House, attempting to limit bathroom access for trans people.

Governor Greg Abbott, who supports such legislation, announced on Tuesday that a special session would be held on July 18. It means the state will get another crack at pushing legislation through to force trans people to use facilities matching the gender on their birth certificate.

Abbott has 20 key issues he wants addressed, first up being the issue that he says forced the special session, preventing the closure of state agencies, including the medical board. Other major issues include abortion, and school choice.

When North Carolina passed House Bill 2 last year, a law that nullified nondiscrimination ordinances passed in cities and states, and required trans people to use the bathrooms and locker rooms matching the gender on their birth certificates in government-owned buildings, it found itself subject to a costly boycott.

The pressure forced a repeal, but the replacement, House Bill 142, left the LGBTQ community in much the same position it was in under House Bill 2.

Not only are public schools, universities, and other entities under state control not able to set transgender-inclusive bathroom policies without approval from the hostile General Assembly, but House Bill 142 also blocks cities from passing nondiscrimination ordinances protecting LGBTQ citizens until the end of 2020.

It is impossible to know how many companies will continue to steer clear of North Carolina due to its continued war on LGBTQ rights, but North Carolina’s brand as a “New South” city has been severely tarnished. A number of cities and states have kept their boycotts in place.

That said, the “repeal” of House Bill 2 satisfied the NBA, NCAA, and ACC enough for them to return.

How far will they seek to go?

Texas’ House Bill 2899 was seen as more likely to succeed than Senate Bill 6, a similar but even more restrictive piece of legislation.

House Bill 2899 would have prevented schools and other political subdivisions from passing or enacting policies allowing transgender individuals to use the bathrooms and locker rooms matching their gender identity.

It seems likely that legislation more closely resembling the House bill will be put forward in the special session than one similar to the more harsh Senate Bill 6, but all options remain on the table.

How severe will the backlash be?

Just how severe Texas decides to go will determine the severity of the inevitable backlash.

A study released in April, commissioned by San Antonio tourism groups and conducted by the Perryman Group, found that boycotts over a “bathroom bill” could cost the state $3.5 billion in annual tourism alone.

The state can already expect progressive cities and states to ban nonessential travel, as they have done with North Carolina, but whether the backlash hits their bottom line hard enough to force them to think twice will have to be seen. If the damage from a boycott is too great, they will likely have to go back to the drawing bard and at least give the appearance of making the situation less egregious.

In other words, they would be required to cook up their own version of North Carolina’s odious House Bill 142.

If nothing else, though, Texas remains the beneficiary of getting to watch North Carolina go first. It appears the message sent by the NBA, NCAA, ACC, and others who were willing to return even under the continued cloud of anti-LGBTQ legislation on the books, is that limiting civil rights is still not a complete deal breaker.

How the state reacts in light of those lessons will be noted by other states still, and will continue to shape the battle over trans rights in years to come.

As it stands now, Texas appears ready to persist.