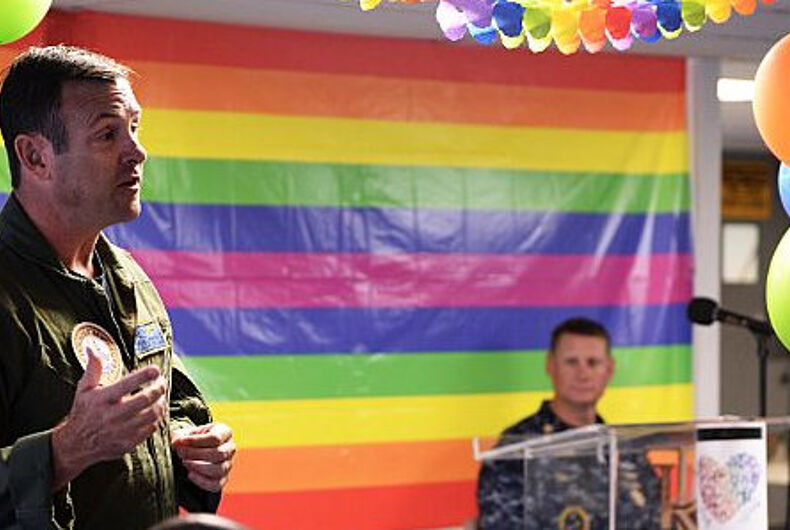 While Donald Trump, who promised to be every gay’s best friend during the campaign, seems to have decided not to issue a proclamation celebrating LGBT pride month, several other sections of the government seem to have missed the memo.

The Department of Defense and State Department have now both issued official statements honoring LGBT people and pride month. Of note: Until recently, LGBT people were unable to serve in the military, and Rex Tillerson, Secretary of State, is the former CEO of ExxonMobil. The corporation infamously refused to protect LGBT people from discrimination until forced to do so to keep government contracts.

“The struggles, sacrifices and successes among the LGBT community continue to shape our history and remind us to uphold tolerance and justice for all. As we celebrate the diversity of the total force, we honor all who have answered the call to serve, and their unwavering commitment to our shared mission,” Undersecretary of Defense Anthony M. Kurta wrote in a memo distributed to service members.

“During the month of June, let us celebrate the diversity of the DoD workforce and rededicate ourselves to equity, dignity and respect for all.”

“To remain the finest seagoing fighting force, the Navy needs men and women who are the right fit for the right job regardless of race, gender, sexual orientation, creed or gender identity,” said Capt. Candace Eckert, Special Assistant for Inclusion and Diversity. “Our goal is to ensure that the mission is carried out by the most qualified and capable Sailors. If an individual can meet the Navy’s standards, they should be afforded the opportunity to be part of the One Navy Team.”

Meanwhile, the State Department told the Washington Blade that it wouldn’t curtail pride celebrations at US embassies and consulates.

“Advancing the human rights of vulnerable groups including LGBTI persons is a core component of U.S. foreign policy,” a spokesperson said. “All people should be protected from discrimination and violence, and must be allowed to exercise their human rights, including their rights to the freedoms of expression, association, peaceful assembly, and religion or belief.”

“LGBTI Pride celebrations are an expression of these rights.”

Tillerson released his own pride statement today, saying “The Department of State affirms its solidarity with the human rights defenders and civil society organizations working around the world to uphold the fundamental freedoms of LGBTI persons to live with dignity and freedom.”

“We also recognize that LGBTI persons continue to face the threat of violence and discrimination. Violence and discrimination targeting any vulnerable group undermines our collective security as well as American values. When all persons are protected on the basis of equality and with dignity, global stability is strengthened. We will continue to support the human rights of LGBTI persons together with like-minded governments, businesses, and civil society organizations globally.”

While Ivanka Trump tweeted a statement of support for pride month, it was widely seen as a sign that her influence with her father was waning.

In the end, the president who claimed he loved us, won’t recognize us. The military and the former head of one of the nation’s most anti-LGBT corporations, however, are acknowledging our rights and contributions to society.

Welcome to Trumpland. Enjoy the ride.

The @StateDept has issued a #PrideMonth statement, but we're 7 days in and @realDonaldTrump is still silent.https://t.co/63LmMEskja

Trump’s ratings are so low if his presidency was a reality show, he’d be fired

Will Texas get away with policing bathroom stalls?