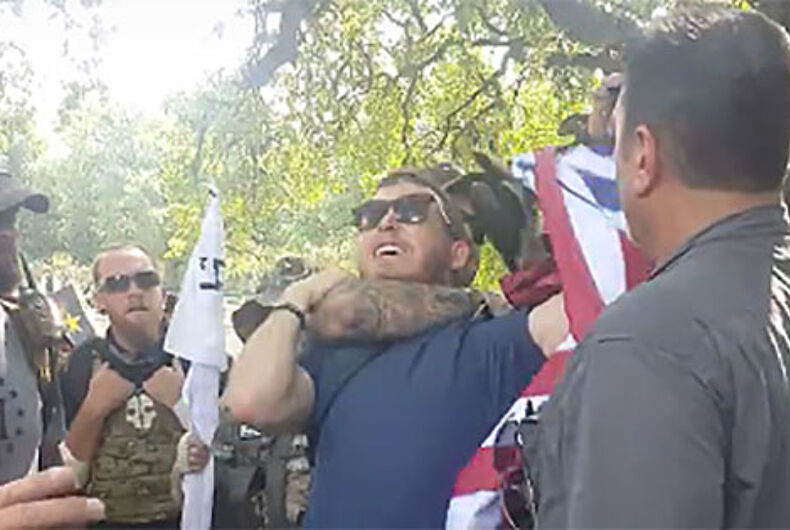 If you think either the Democratic or Republican parties are disorganized and rife with internecine squabbling, you ain’t seen nuthin’ until you’ve watched video from a standoff in Houston’s Hermann Park between two heavily-armed, rival Texas militia groups that nearly came to blows last weekend. One man was held against his will in a choke hold and then forcibly ejected from the park.

The Southern Poverty Law Center featured this disturbing display of white supremacist infighting in a report on how the so-called alt-right are engaging in a flame war with a group it described as “an antigovernment organization that primarily recruits current and veteran military, law enforcement and emergency first responders.” That group is known as the Oath Keepers, and from their website and statements, they apparently include non-white members.

The rival groups had gathered in the park Saturday to counter-protest a rally against the statue of Sam Houston, which an “antifa” — meaning anti-fascism — group had announced on Facebook it would be protesting. Like moths to a flame, assault-rifle toting members of the Oath Keepers and other groups, including This Is Texas, Vanguard America and followers of the neo-Nazi website The Daily Stormer gathered in the park and found no protest to demonstrate against.

So they fought each other, and with the exception of that one frightening chokehold, there was only verbal posturing, no physical engagement, possibly because Houston Police were closely monitoring the groups and took the so-called alt-right protester away when he was marched out of the park by the Oath Keepers.

Draped in a red, white and blue flag featuring a swastika, the white nationalist had tried to display signs against Israel, Communism, and other examples of what he called “good memes.” But the Oath Keepers showed him he was not welcome.

Another disturbing confrontation posted to YouTube shows a Daily Stormer writer arguing with David Amad of Open Carry Texas, who said he believes “racism is stupid.” To that, the bearded man who only identified himself as Azzmador declared, “I am a racist, I don’t care.”

In another video, Azzmador also expressed his hatred for Jews, Jared Kushner and Milo Yiannopoulos, while speaking to reporters alongside supporters wearing masks.

Another rightwing myth: Trump had the best reaction to Pulse shooting