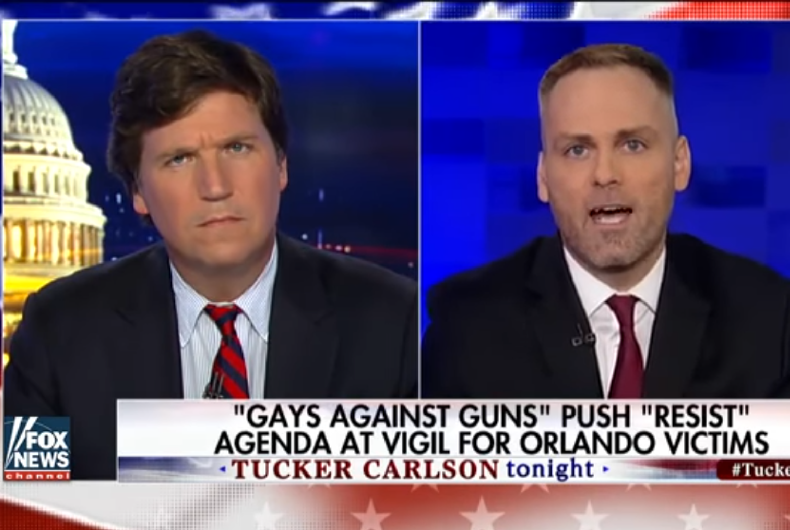 It looks like conservatives are trying to re-write history and make people think that Donald Trump was the only politician who cared at all about the Pulse shooting.

If you ask a gay Republican why they support Trump, you might get a vague reference to the Pulse shooting. But gay conservative Chadwick Moore got very specific on Fox News this week. He told Tucker Carlson:

As we all know, Trump came to Orlando immediately after the shooting. The president waited four or five days, President Obama.

Trump did not go to Orlando immediately after the shooting. Hillary Clinton did. Barack Obama did. Donald Trump did not.

Moore posted a message on Twitter saying that he was thinking of Milo when he said “Trump,” which is not at all an apology or even an acknowledgement that he misinformed people on national TV.

Millions of people heard him say that Trump visited Orlando right after the shooting, while far fewer saw the tweet later, and even fewer understood the tweet as a correction.

It’s important to remember these things correctly. Donald Trump’s initial reaction to the Pulse shooting was deplorable, focusing not on the victims but on how awesome he is:

Appreciate the congrats for being right on radical Islamic terrorism, I don't want congrats, I want toughness & vigilance. We must be smart!

He then refused to visit Orlando after the shooting. Instead, he went to Orlando two months later to attend a conference of evangelical leaders put on by an organization whose founder called on Christians in 2012 to “save the nation from the pagan onslaught imposing homosexual marriage” and referred to the LGBTQ movement as “homosexual totalitarianism.”

Gay conservatives latched on to the Pulse shooting, claiming that it’s proof of how pro-LGBTQ Trump was, even though Trump promised to make sure that people like Mateen can be armed to the tooth and to keep the government from fighting homophobia and transphobia in the public sphere lest someone’s religious sensibilities get offended.

But then Tucker Carlson and Moore feigned shock – while they were literally discussing a shooting at an American nightclub performed by an American from New York who lived his whole life in America and used America’s lax gun laws to kill LGBTQ people in America – that American LGBTQ people are at all concerned with homophobia in America.

It’s not about logic, it’s about expressing their loyalty to the cause by spinning everything in the most reactionary way possible.

Now the myth-making is getting more specific. In a few years the right might convince itself that Trump flew to Orlando when the shooting started and slew Omar Mateen himself.