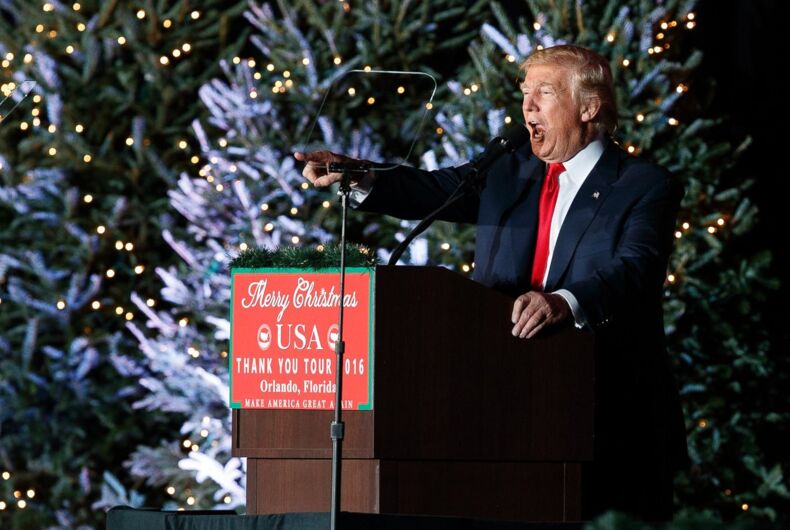 Donald Trump on his Thank You tour.Photo: Associated Press

Donald Trump is on his “Thank You” victory tour and on Friday he made a stop in Orlando, where he spoke of the shooting at the Pulse nightclub and made a surprising admission about the temperament of his supporters.

Mirroring comments he made during his Republican National Convention speech, he called it “the worst mass shooting in American history and the deadliest assault on the LGBTQ community,” and promised to keep “radical Islamic terrorists the hell out of our country.”

Pulse shooter Omar Mateen was born in New York City and raised both there and in Florida.

Trump has still not visited the nightclub, unlike his presidential campaign opponent Hillary Clinton. “Women For Trump” surrogates visited the site in October.

In a speech given after the shooting in Orlando, he called for a ban on Muslims entering the country.

Trump thanked his supporters at the rally for helping deliver the pivotal swing state of Florida to him, although he lost Orlando by a considerable margin.

“We had fun fighting Hillary, didn’t we?” he asked the crowd. “You were vicious, violent, screaming, ‘Where’s the wall? We want the wall!’ Screaming, ‘Prison, prison! Lock her up!’ I mean you are going crazy…you were nasty and mean and vicious and you wanted to win, right?

During a “Lock her up!” chant at a previous “Thank You” rally, he told the crowd, “That played great during the election, now we don’t care.”

Trump also continued his attack on the media at the rally on Friday, calling them dishonest while pointing to the cameras in back. The crowd booed and chanted, “CNN sucks,” a common refrain at his rallies during the campaign.

Watch the event in the video below.

Does this Christmas commercial have a subliminal pro-gay message?