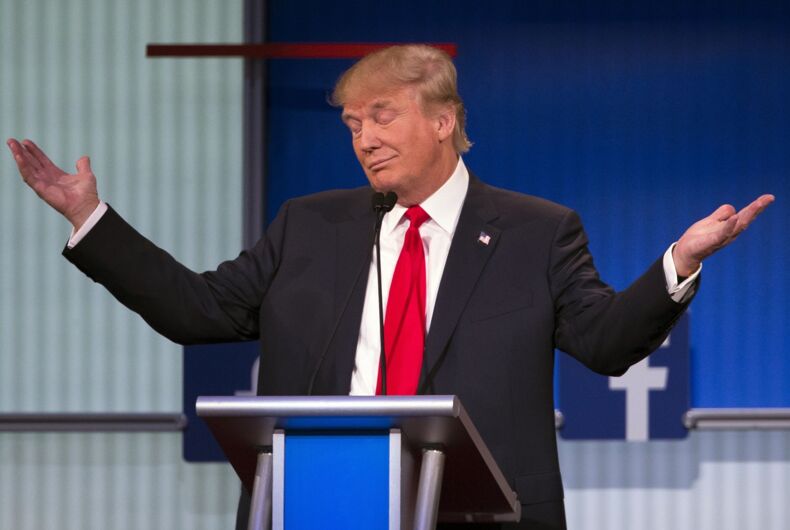 If we are to believe published reports, President Donald Trump feels genuinely and deeply moved when seeing the faces of death and grief resulting from the brutal actions of tyrannical regimes and individuals.

After witnessing scenes on TV of people gasping for air, and seeing convulsing and lifeless bodies randomly spread on the ground, Trump ordered the bombing of a Syrian military airbase thought to have been used to launch planes suspected of dropping deadly toxic gas upon defenseless civilians, including young children and babies, in northern Syria’s Idlib province.

Trump publicly spoke out and is now considering even greater sanctions on North Korea following the recent death of Otto Warmbier, a 22-year-old student from the University of Virginia, whom the North Korean government sent home in a deep coma after sentencing him to a 15-year hard labor prison sentence for allegedly stealing a propaganda poster, or according to Pyongyang, “acts against the state.”

The President generally stands first on the Tweetosphere line in thrusting out his severe condemnations a mere nanosecond after reports of suspected Jihadist terror attacks anywhere around the globe, especially in Europe.

He has, however, allowed his Twitter feed a needed respite by allowing it to sleep following terrorist attacks perpetrated by non-Muslims upon members of the Islamic community, like the recent incident in London, which resulted in the death of one and injuries to several others during their holy month of Ramadan.

Trump has demonstrated a consistent pattern of selective situational compassion and outrage depending on events and the countries or individuals involved.

Trump has reversed several key initiatives from the Obama era that were meant to increase political and economic programs and engagement and ease some sanctions on the Cuban government. During the presidential campaign, Trump argued for a retightening of past sanctions until that government initiates “religious and political freedoms for the Cuban people,” even though the U.S.-led embargo on the island has proven to be a failure over the past 50 years.

It seems, however, that Trump would rather engage in a sword dance with his Saudi Arabian dictator friends than speak out forcefully against documented civil rights violations in that country. A recent report from the Human Rights Watch organization found:

Through 2015 Saudi authorities continued arbitrary arrests, trials, and convictions of peaceful dissidents. Dozens of human rights defenders and activists continued to serve long prison sentences for criticizing authorities or advocating political and rights reforms. Authorities continued to discriminate against women and religious minorities. [Under this system, ministerial policies and practices forbid women from obtaining a passport, marrying, travelling, or accessing higher education without the approval of a male guardian, usually a husband, father, brother, or son.] On March 26, [2015] a Saudi Arabia-led coalition began an airstrike campaign against Houthi forces in Yemen that included use of banned cluster munitions and unlawful strikes that killed civilians.”

Trump appears to be cozying up to President Rodrigo Duterte of the Philippians by inviting him to the White House for a getting-to-know one another session. This is the same leader who has unleashed a storm of terror against suspected drug dealers resulting already in approximately 7,000 executions during only the past year. In a telephone call from the Oval Office, Trump praised Duterte for doing “an unbelievable job on the drug problem.”

Related: Philippines president jokes ‘I might turn gay’ from all his selfies with men

While reports have confirmed the existence of detention camps in the Republic of Chechnya – a region within the Russian Federation – holding men accused of being gay and bisexual, where they are beaten and tortured with electric shocks. Some of the men have died of the injuries inflicted upon them.

Trump has remained absolutely silent on this matter with his BFF Vladimir Putin, who continues to deny the situation ever existed.

On the domestic front, Trump’s selective situational compassion and outrage stand in full force. He verbally attacks and, thereby, calls into question the validity of our judicial system and the separation of governmental powers each time he speaks out against the courts in cases in which he has vested interests, such as in individual and joint action suits again his alleged Trump University and in his executive travel bans.

When will he vigorously express his public concern in clear-cut cases of police brutality, which often result in the deaths of innocent people of color, and later in the acquittal of the law enforcement officers involved?

A recent case involved a Minnesota police officer whom a jury found not guilty in the shooting death of Philando Castile during a traffic stop in which the officer mistook the driver for someone suspected in a robbery. Castile’s girlfriend Facebook live-streamed events immediately following to the shooting, which clearly shows that he posed no imminent danger to the officer.

The National Rifle Association remained stunningly silent following the verdict even though Castile represented a virtual poster model for the NRA by legally purchasing and carrying a gun in his car, and immediately notifying the officer of this fact before searching the vehicle.

If Trump is so concerned after viewing the dead faces of innocents and hearing the grief of those who loved them, then why has Trump ordered “his” Justice Department to rescind orders to investigate several police departments for possible racial biases and differential treatment, which officials in the Obama administration initiated to more adequately ensure accountability in the wake of the rising tide of high profile incidents and tensions between local law enforcement agencies and the communities they are meant to serve?

And when was the last time there was a current president, of the United States or any other country, who expressed compassion, or any other emotion, in the ever-increasing murders of trans people, primarily trans women of color?

During the primaries and since, Trump asserted in loud and clear terms that he would never foreshadow the tactics for achieving his agenda priorities as not to alert his adversaries and to maintain the element of surprise. While this strategy seems reasonable in some instances, the president must develop and project a certain consistency and stability of tone and actions to offer reassurance to our nation’s allies, while setting clear boundaries to those who would do us and others harm.

Whether his intention or not, Trump’s consistent inconsistencies broadcast what and who he values and who he dismisses, and it eventually will underscore, and indeed undermine, his presidency.