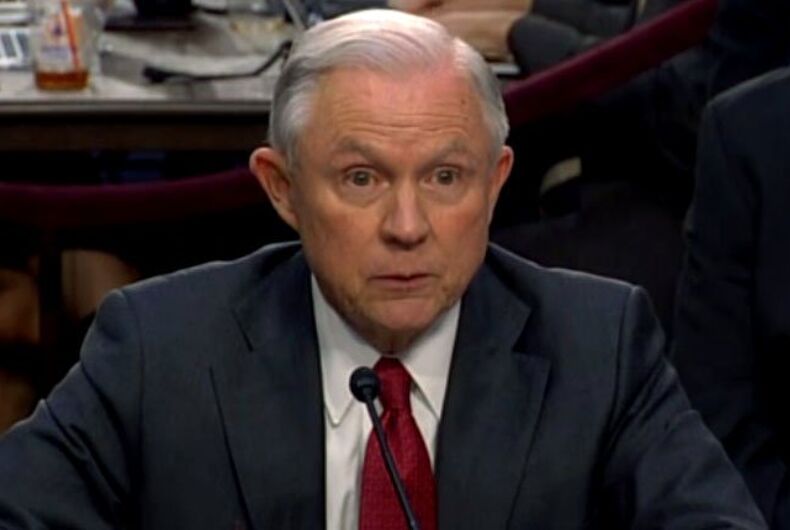 If you’re part of the Trump administration or worked for his campaign, the chances are high that you’re gonna need a lawyer. And they aren’t hiring just any old attorneys. They’re hiring the worst of the worst.

Republicans love anti-LGBTQ lawsuits and racism. Good old boy and Attorney General Jefferson Beauregard Sessions, who was once passed over for a seat on the federal judicial bench for making racist comments, has hired a notoriously homophobic racist to be his lawyer.

Sessions has picked Charles Cooper to defend him against allegations of improper conduct with Russian agents. Cooper is best known to the LGBTQ community as the head of the legal team defending California’s Prop 8 ban on same-sex marriages.

Under President Reagan, Cooper, then an attorney advising the Justice Department, issued an opinion that argued that employers had a right to fire anyone with HIV if they were afraid they could catch the disease from the employee.

Then-New York attorney Harry N. Turk said at the time that Cooper took “some unusual legal twists and turns to come up with that conclusion. Every medical expert I’ve ever heard says it cannot be transmitted casually in the workplace, so how can that be a basis for discrimination?” Newsflash: It can’t.

As a deputy to Assistant Attorney General William Bradford Reynolds, Cooper argued that private religious schools that actively discriminate against African-Americans (like Bob Jones University did at the time) should get tax breaks from the federal government.

Cooper was on the shortlist to be Solicitor General in the Trump administration, but decided to withdraw his name from consideration after watching “the treatment that my friend Jeff Sessions, a decent and honorable man who bears only good will and good cheer to everyone he meets, had to endure.”

What did Sessions have to “endure?” He faced questions about his racist remarks that disqualified him for a federal judgeship. After all, if even Republican decided that he was too racist to dispense justice a few years ago, how is he qualified to lead the entire Department of Justice?

Perhaps Cooper dropped out because he didn’t want it noted that his previous opinions were all racist, homophobic, and, quite frankly, wrong. That’d make it awfully hard to argue he’s qualified to provide more legal advice to an already ethically and morally challenged administration.

But, hey, his friend got him a job anyhow that will likely pay more and won’t require a public airing of his numerous sins and failings.

Nepotism is the theme of this administration and Beauregard is no exception.