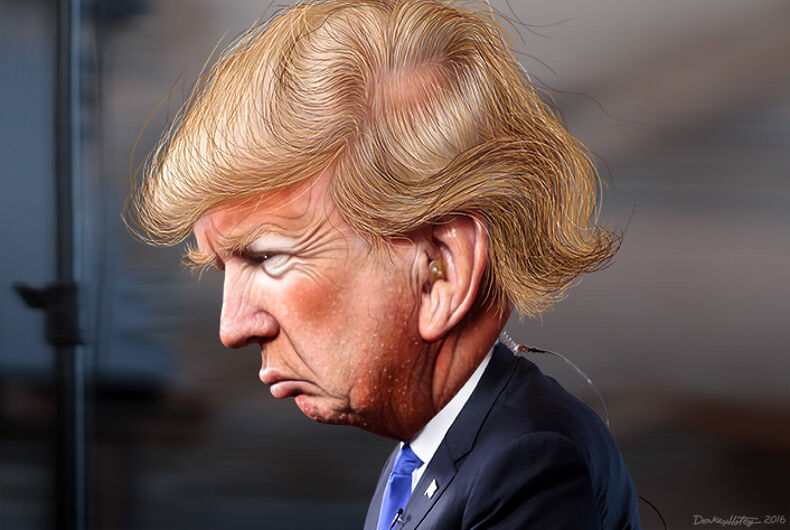 Born without software responsible for empathy, installed standard in most human operating systems, Donald Trump seems to have downloaded at least the temporary version of the human empathy app this past week.

He did this after witnessing the horrendous and heartbreaking pictures of children and little babies struggling to breathe as others succumbed to torturous deaths under the effects of sarin gas dropped from the skies by Syria’s brutal dictator, Bashar al-Assad (who likewise was born without essential human software).

Making an exception to his “Me First” (which he refers to as “America First”) policy, and contradicting his Secretary of State Rex Tillerson’s recent declaration that the Syrian people alone will decide the fate of Assad, Trump chose to bomb the airport used by Syrian military aircraft to deliver the toxic agents of mass carnage. Several leaders abroad and political heads across the political spectrum in his own country have come out in provisional support for the President’s action.

While history will determine the efficacy and consequences of Trump’s decision, why did it take choking and dying babies to ignite Trump’s humanity?

He showed no perceptible empathy among images of drowned children and babies washing up upon Mediterranean shores after their rickety boats tossed them and their families into the cold sea as they attempted to flee their war-torn counties. In two consecutive White House Executive Orders, he banned Syrian refugees, in fact, refugees from most Muslim-majority countries, from immigrating to the United States.

Why haven’t the pictures of the thousands of diseased and impoverished faces of people forced to live in refugee camps moved this President to act with empathy rather than with apparent contempt?

Additionally, President Trump needs to understand that sarin gas is not the only substance toxic to children and other living things.

In his brief time in office, Trump has declared war on the environment by proposing a substantial budgetary reduction of an estimated 24 percent and a staff cut of 20 percent to the Environmental Protection Agency, consideration of lower automobile emission and fuel efficiency standards, relaxation of prohibitions against dumping toxins like coal ash into streams and rivers, reinstatement of the potentially environmentally damaging Dakota Access and Keystone oil pipelines, and increased coal mining, natural gas, crude and scale oil drilling.

In his recent wide-ranging executive order, he further reversed Obama-era environmental protections by reducing governmental regulations on the coal and oil industries that were intended to curb greenhouse gases. Specifically, Trump repealed Obama’s moratorium on coal mining on federal lands and on coal-fueled power plants, and advised federal agencies to “identify all regulations, all rules, all policies…that serve as obstacles and impediments to American energy independence.”

Trump supported the so-called Trump/Ryan (Tryan) “American Health Care Act” proposal that, if passed, would have cut millions of people, including children and little babies, from affordable health care insurance.

Hopefully the new human empathy app Trump downloaded onto his psychic system is more lasting than the self-destructing one-time-only message giving orders to the agents in the “Mission Impossible” series of movies and classic TV.

Maybe we will see a kinder and gentler Donald J. Trump, but I won’t hold my breath even as his presidency portends an increasingly toxic environment, literally and figuratively.