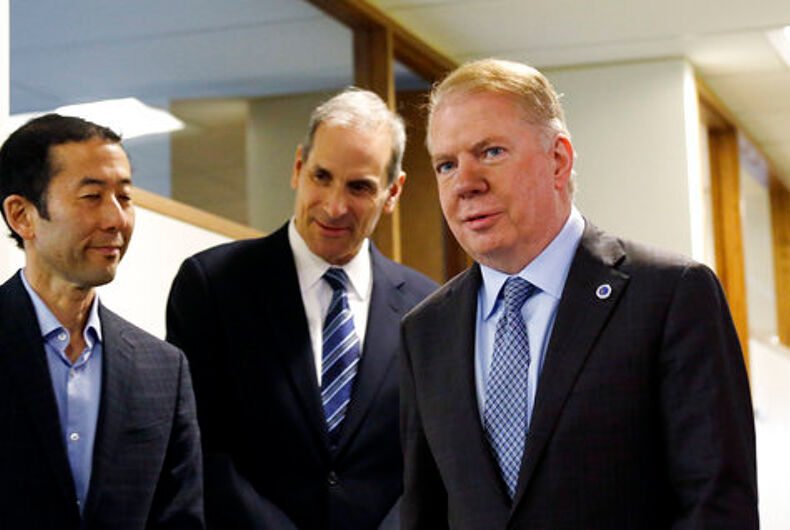 Seattle Mayor Ed Murray, right, walks past his husband, Michael Shiosaki, left, and his attorney, Bob Sulkin, before speaking to the media, Friday, April 7, 2017, in Seattle. Three men claim that Murray sexually abused them in the 1980s, paying for sex when they were teenagers and Murray was in his 30s. Murray denied the allegations and said he will not step down.Photo: AP Photo/Elaine Thompson

SEATTLE (AP) — Ed Murray led a long campaign to legalize same-sex marriage in Washington state, toiled for nearly two decades as a state lawmaker and won his biggest personal political victory in 2013 when he unseated Seattle’s incumbent mayor by promising the ultra-liberal city to raise the minimum hourly wage to $15.

Just as he took on a role as a high-profile critic of President Donald Trump and prepared to launch a re-election campaign, Murray was hit Thursday with a political bombshell — accusations from three men that Murray sexually abused them in the 1980s.

On Friday, Murray held a brief news conference to deny allegations in a lawsuit by one man, saying “they were very painful for me. It was painful for my husband.” Through a spokesman he has also denied the allegations by the other men.

He said he will not step down and is sticking to re-election campaign plans but refused to answer reporters’ questions, saying the case “is now a legal matter that is in the courts.”

Murray’s spokesman, Jeff Reading, previously suggested unnamed Murray enemies were behind the claims. “It is not a coincidence that this shakedown effort comes within weeks of the campaign filing deadline,” Reading said.

Calls to city councilmembers earlier for Friday for comment about the mayor and what impact the allegations could mean for his political future went unreturned.

Murray, 61, grew up in working class neighborhoods in and around Seattle as one of seven children in an Irish Catholic family and became one of the state’s most prominent political figures.

“Things have never come easily to me in life, but I have never backed down and I will not back down now,” Murray told reporters in remarks that lasted less than two minutes.

As a young man, he considered joining the priesthood and spent a year at a seminary in 1976 before studying sociology at the University of Portland, a private Catholic institution.

Murray ended up working as a paralegal with public defender lawyers in Portland before returning to Seattle and joining the vanguard of the gay rights movement in the 1980s, serving as campaign manager for Cal Anderson, a Seattle state senator who was the state’s first openly gay member.

Anderson, Murray’s mentor, died in 1995. Murray failed in his bid to win Anderson’s seat, but he was appointed to fill the legislative seat of the state representative who won the state senate campaign.

During his 18 years as a state lawmaker, Murray was the prime sponsor of Washington’s gay marriage law, spearheaded an effort to protect LGBTQ youth in public schools and led the state’s push to ban discrimination based on sexual orientation.

“As a legislator, Ed was a warrior for core Democratic values,” said state Sen. Reuven Carlyle, a fellow Seattle Democrat. “He was unquestionably a tough negotiator with an eye on the long game for progress.”

The 2013 mayoral race was a bruising campaign that focused on whether Murray would be more liberal and effective than incumbent Mike McGinn, a fellow Democrat, in the notoriously difficult city to govern because of competing liberal factions and an older, established political order resistant to change.

Murray kept his promise about the minimum wage increase. The higher minimum wage was phased in over time. Murray also recently fought to boost funding to address Seattle’s homelessness crisis.

Murray has been with his partner, Michael Shiosaki, for 24 years. They married in 2013. Shiosaki hugged Murray after he made his statement Friday.

“He’s ambitious,” state Sen. Jamie Pedersen, a fellow Democrat, said of Murray. “Not that he’s always right — there are issues I disagree with him on. But when you look at the agenda that he had and what he’s been able to accomplish in four years, he’s done a huge amount for the city.”

After Trump was elected last fall, Murray became a frequent critic. He announced last week that Seattle was suing over Trump’s executive order that threatens to withhold federal funds from communities that refuse to cooperate with efforts to find and deport immigrants in the country illegally.

Murray on Thursday afternoon was planning on touting new numbers showing progress made by the Seattle Police Department under federal supervision — until the news broke of the lawsuit by a man who is now 46 and said in court documents that the mayor “raped and molested him” over a period of several years beginning in 1986.

The man identified only by his initials, D.H., said he was 15 and addicted to crack cocaine at the time and that Murray was in his 30s.

On Friday Murray said D.H.’s allegations “are simply not true” and said he felt sad for the “troubled” individual.

The man, Lincoln Beauregard, sent a letter Friday to Murray’s lawyer offering to make D.H. available for a video deposition and disputed that the lawsuit was politically motivated. Following Murray’s statement Beauregard said Murray wasn’t being truthful. He said the mayor’s representatives never asked for his client’s identity and that if Murray is being forthright “he should have no idea who my client is … how can he paint him as ‘troubled.’ ”

In the lawsuit filed Thursday, however, the man had said he had sought mental health counseling and was taking part in addiction-recovery programs.

The two others who made allegations against Murray told The Seattle Times they met him while living in a Portland center for troubled teens. Jeff Simpson and Lloyd Anderson said they were paid for sex in the 1980s and would testify.

Portland police have found no records linking either man to Murray, said Sgt. Pete Simpson of the Portland Police Bureau.

Did President Trump just take action based on (temporary) empathy?