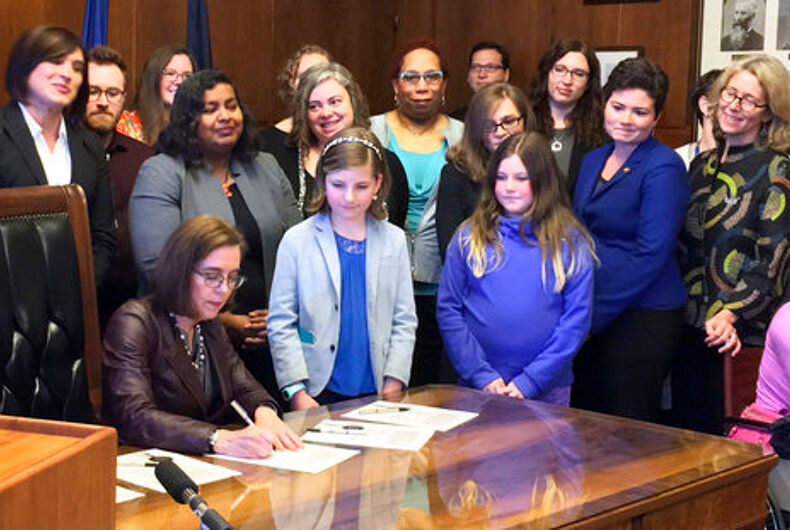 Gov. Kate Brown has signed a bill that will make it easier for transgender people in Oregon to shield any updates they make to their birth certificates, a process typically conducted through the court system without privacy from public view.

The measure, which takes effect next year, makes Oregon the second state after California to adopt laws specifically designed to help mitigate potential discrimination against transgender individuals from employers, landlords or anyone else who is otherwise able to dig up birth-record changes through public record.

The new law eliminates the requirement that changes to someone’s name or gender identity must be posted publicly by the courts. It also allows court cases involving gender identity changes on birth records to be sealed.

It’s a minor tweak to state law that could have a big impact on the local transgender community, says 59-year-old Stacey Rice, executive co-director of Q Center, a Portland community support center for LGBTQ individuals.

Rice is a transgender woman but still hasn’t been able to change her North Carolina birth records after 17 years because she hasn’t undergone a sex-change operation, which the state says must also be confirmed through a notarized letter from their doctor. The same requirements apply for driver’s licenses, although Rice got it done anyway thanks to the kindness of a North Carolina DMV employee years ago.

“I was going to have a driver’s license that has my female face on it, my female name, but it’s still going to say ‘M’ and let’s say I get pulled over for some reason and maybe a police officer looks at it and says ‘what’s going on here?’ that was terrifying,” Rice said.

HB 2673 passed the Democratic-controlled Oregon Legislature earlier this month with some Republican support at a time when, two years after the U.S. Supreme Court’s legalization of same-sex marriage, the nation remains largely divided as to how to balance LGBTQ rights and religious freedoms.

This year about 30 states introduced roughly 130 anti-LGBTQ bills, about half last year’s figure, according to the D.C.-based Human Rights Campaign. Most of the measures have died, but legislatures in South Dakota, Alabama and Texas passed bills providing protections for faith-based adoption agencies that do not want to place children with gay or lesbian adoptive parents.

Opposite scenarios are playing out in other states like Nevada, where GOP Gov. Brian Sandoval signed a law earlier this month banning “conversion therapy” for LGBTQ youth. And this week, Republican Congressman Scott Taylor of Virginia agreed to co-sponsor the federal Equality Act, which would give that community civil rights protections.

Oregon wasn’t always a welcoming place for gay rights. Voters approved a measure banning same-sex measure in 2004. It was overturned a decade later.

For Oregon, Brown said in emotional remarks that the transgender equity bill carries broader significance in the aftermath of last week’s deadly stabbings of two men trying to defend two teenage girls from racial and religious slurs on a Portland light-rail train.

“Hate and discrimination have no place in our Oregon,” Brown said.

Not everyone feels welcome at pride. Here’s why.