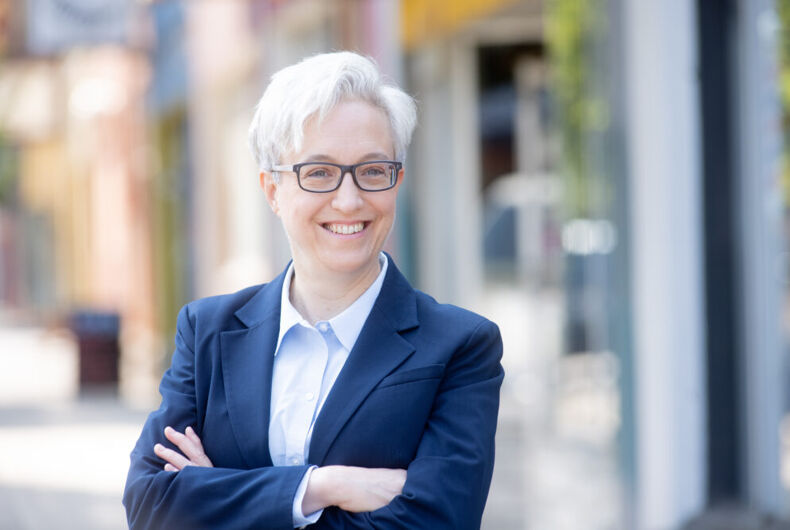 Oregon politician Tina Kotek (D) was the longest-serving House speaker in Oregon history and also the first to be an out lesbian. She used her position to secure greater LGBTQ rights and to help manage the state’s other environmental and societal challenges.

Tina Kotek At a Glance

She worked as a public policy advocate for the Oregon Food Bank, policy director of Children First for Oregon, co-chair of the Human Services Coalition of Oregon, and co-chair of the Governor’s Medicaid Advisory Committee.

She declared her candidacy for Oregon’s governorship in September 2021 and won the Democratic primary in May 2022.

Tina has a wife named Aimee. They live in North Portland with their two dogs.

Kotek said she came out as a lesbian in her early twenties. She felt it was “liberating” and strengthened her resilience.

“For me, coming out became a personal responsibility to undermine hatred and bigotry,” she wrote. “I promise to always use my voice and my power in Oregon to stand up and defend and advance LGBTQ+ rights.”

In response, Kotek said she’d support a state constitutional amendment defending the right of same-sex couples to marry. She also said she would “veto any legislation that undermines marriage equality in Oregon.”

“This is obviously personal for me,” she told Oregon Public Broadcasting. “I will defend my marriage. Justice Thomas’ opinion in the Dobbs case has set off alarm bells for many people. Everything is on the line now – access to birth control and contraception, marriage equality, gender-affirming care, and more. As your Governor, I will always be ready to stand up for what I believe and fight back against injustice.”

Kotek has said that Republicans have promoted transgender youth sports bans as a “manufactured” way to distract Americans from more important issues, like health care costs and inflation.

“Unfortunately, some politicians are racing to stigmatize vulnerable trans kids in order to divide people and distract us from real issues,” she said.

“Picking on a couple of trans kids who want to be their authentic self and play sports? Is that really the issue that we need to be focusing on in this country?” she asked. “I don’t think so.”

“Please know this – you should never hide who you are or who you love,” Kotek wrote. “You are beautiful, and you are loved exactly as you are. I will always stand with you.”

“We have worked to make our schools safer and more inclusive by having a strong anti-bullying law and improving social and emotional supports for students in our schools,” she added.

“Gender-affirming care is health care, period. Everyone should be able to access the health care they need to lead healthy and authentic lives,” she said.

Kotek has said she would like to see her state’s anti-discrimination laws more evenly enforced so that LGBTQ people in conservative and rural parts of the state feel comfortable reporting anti-LGBTQ attacks.

She has also said, “When we talk about our trans community, we should be talking about how to prevent assaults on trans people, especially trans women of color, who are more likely to be assaulted.”

Tina Kotek is a lesbian woman who has championed LGBTQ rights in her state.

Stay informed about her career by subscribing to the LGBTQ Nation newsletter.