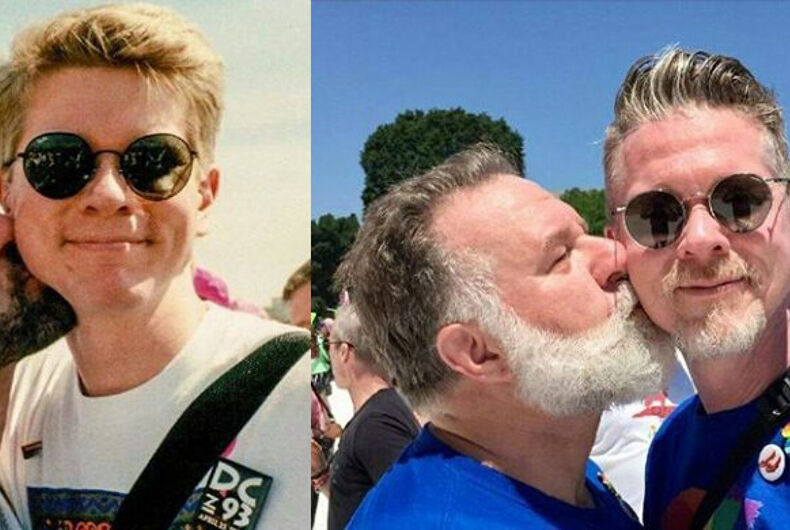 How many LGBTQ people have heard that dismissive refrain?

But as people come out earlier and couples celebrate longer relationships, it’s becoming clear as day that being LGBTQ isn’t a passing fancy.

One gay couple’s photo is serving as a viral illustration of that longevity.

Husbands Nick Cardello and Kurt English have been together for nearly 25 years. Like so many couples, they took a photo together at Washington Pride in 1993. This year, they recreated the photo at Pride, striking the same pose they had 24 years prior. The only major difference, the color of their now-greying hair.

”it's just a phase” pic.twitter.com/WlkgiHDnh9

One Twitter user who shared the photo followed up saying, “No but seriously this is the best thing I’ve seen today hands down.”

Cardello, who is a photographer, told PinkNews he was blown away by the viral response to the juxtaposed photos, accompanied by the tongue-in-cheek caption: “It’s just a phase.”

“I only posted the photo on my Facebook page after the march. It took off from there,” he said. “Someone else copied it to Twitter, Instagram & Reddit. That’s when it really took off. A reporter from Brazil said it had over a million likes there.”

It also inspired some couples to share their own now-and-then photos.

Cardello said the photo was inspired by the fact that the couple was still marching for LGBTQ equality two decade later.

While the fight for equality continues, he said he hopes that younger LGBTQ people will see the photo as a reminder that it’s possible to find a life-long love.

“The youth needs to see that it is possible to find a loving partner, and that the relationship can last,” he said, noting that portrayals of same-sex couples growing old together are rare. “A loving partner can be a difficult thing to find, once you do you must protect it and nurture it.”