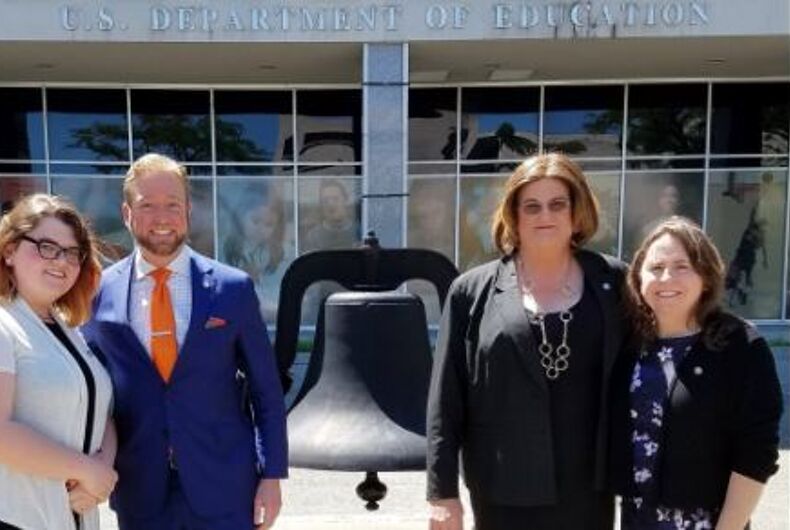 The LGBTQ conservative group the Log Cabin Republicans met with the U.S. Department of Education to discuss protections for transgender students on Tuesday, presenting officials with a white paper outlining policy suggestions.

The group’s solution aims to offer accommodations for transgender students while also allowing for school districts to have more control over how they handle the issue.

The Trump administration backed away from those protections, a move that drew criticism from the Log Cabin Republicans.

“There exists an important need to provide basic liberties to all students while still respecting the diverse municipal landscapes which comprise the thousands of school districts in our nation,” the paper, titled “Transgender Student Safety & Equality For All Students,” reads. “A transgender student’s freedom needs to be handled in the same responsible manner that applies to their non-transgender peers. If consistent accommodations are being made for non-transgender students, those same accommodations must be made for their transgender peers.”

Log Cabin Republicans President Gregory T. Angelo said during a recent appearance on CBS News that Obama’s directive was a “one-size fits all requirement, and a mandate, from the federal government that if not complied to could have potentially taken away funds from public schools.”

Angelo then went on to announce that the Log Cabin Republicans had been invited by the Department of Education to brief them on their suggestions for replacement guidelines.

The group says their Transgender Leadership Caucus members worked on the white paper for over two months.

Angelo recently drew criticism for taking part in a gay Republicans panel last month that including former politician Fred Karger, and writers Lucian Wintrich, and Chadwick Moore, both of whom made transphobic comments.

BuzzFeed News reported that along with Wintrich and Moore, the forum’s moderator, Jeff Goolsby, all made disparaging remarks about the transgender community. Angelo is said to have sat silently by, not coming to the defense of trans people.

The Log Cabin Republicans responded on Twitter that Angelo spoke up for transgender rights, but those remarks don’t appear to have come in response to the anti-trans comments made by Wintrich, Moore, and Goolsby, the Washington Blade reports.

“It is a honor to represent Log Cabin Republicans and our transgender community to the Department of Education,” said Regina W. Roberts, who worked on the paper. “We are very pleased with the conversations and are looking forward to helping to produce Title IX guidance that will protect the privacy and needs of all students, both transgender and non-transgender alike.”

“Today’s meeting with the Department of Education was very heartening and quite productive,” added Jennifer C. Williams, who also worked on the paper. “Their staff were fully engaged and they asked many great questions about the important issues involved and about our lives as transgender Americans.”

“I couldn’t be more proud of our Transgender Leadership Caucus — or of the Department of Education for taking this important meeting,” Angelo said. “The white paper we presented this morning marks the culmination of weeks of work on behalf of transgender students, but it does not mark the end of our efforts. Log Cabin Republicans remains committed to the safety of transgender students and the equality of all students, and we look forward to continued conversations with the Trump Administration to achieve that end.”

Trump firing James Comey is a repeat of Nixon’s presidency