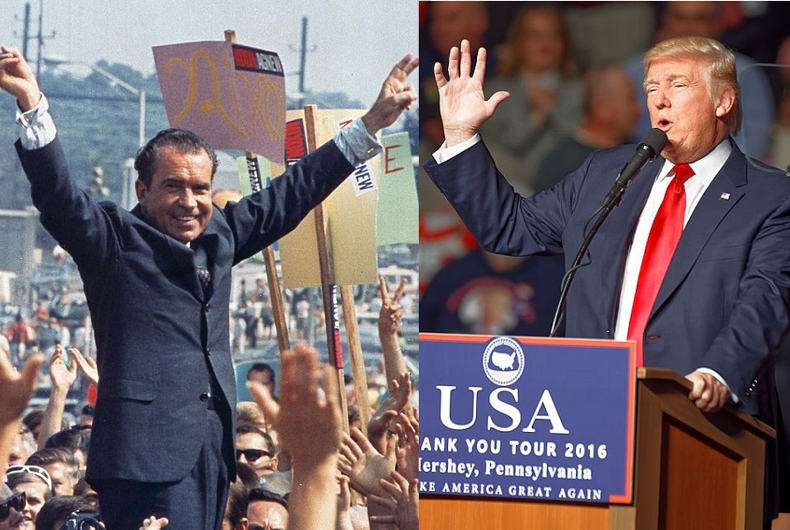 During the height of the investigations into Watergate – when operatives illegally broke into Democratic National Committee offices in 1972 – President Richard Nixon had the Special Prosecutor in charge of conducting the probe fired on October 20, 1973.

The House of Representatives Judiciary Committee requested that the Justice Department secure a Special Prosecutor, and during his confirmation hearings as Attorney General, Elliot Richardson committed to fill this position.

The instigating event triggering Nixon’s fateful reaction to fire Special Prosecutor Archibald Cox was his issuance of a subpoena requiring the President to hand over taped conversations in the Oval Office, which he initially refused to do. The U.S. Supreme Court, in a unanimous 8 – 0 decision (Rehnquist did not vote), ordered Nixon to present the tapes to the investigating committees in the House, which he eventually did. The tapes included the now infamous 18-minute gap.

The framers of our great Constitution, in their wisdom, devised a system of checks and balances between the three major branches of government so that no single branch could grab excessive powers over the others. They certainly had good reason not to replicate in their newly established country what they had experienced as a tyrannical British monarchy.

Possibly because Donald Trump shows little interest and knowledge in the study of history and in learning the mistakes of past presidents, and he demonstrates a real lack of understanding how our brilliantly-constructed system of checks and balances operates, this president has stepped into and is now up to his neck in the muck dumped onto the political landscape by Nixon.

While officially praising and even gloating over how FBI Director James Comey drew attention to the investigation into Hillary Clinton’s use of a private email server, Trump fired Comey on Tuesday on the charge that his actions during the election jeopardized public confidence in the agency.

In his letter firing the Director, Trump wrote in part: “It is essential that we find new leadership for the FBI that restores public trust and confidence in its vital law enforcement mission.”

Trump’s action and reasoning defies credibility. Just like how Cox entered deeper into the criminal attack on the DNC and the White House’s coverup, Comey has publicly stated his commitment to investigate Russia’s interference in our 2016 presidential election process. He announced that he is looking into whether any political operative in the Trump campaign, and most notably Trump’s chief aid and National Security Advisor Michael Flynn, colluded in the cyber-theft of Democratic Party documents.

A major question Comey was investigating at the time of his firing was why Trump decided to continue Flynn’s involvement in very sensitive security meetings a full 18 days following acting Attorney General Sally Yates informing Presidential Counsel Donald McGahn of Flynn’s possible ties to the Kremlin, which might compromise him to a foreign power.

Comey was also investigating the actual reason Trump chose to fire Yates (on the charge of refusing to enforce his refugee and immigrant ban) a few short days after notifying the White House of Flynn’s actions rather than terminating Flynn. Trump reluctantly let Flynn go following leaks by the Washington Post.

Maybe we arrived at this point because Trump still operates from the mindset of a business owner, a virtual monarch whose dictates all must follow. In Trump’s former world, no checks and balances intervened to circumvent his will. Except for those on the nepotism fast track, all must abide by his rules, or “You’re fired!”

Though he tried to “fire” Gonzalo Curiel, the judge overseeing the fraud case involved with Trump University, who Trump attacked for being biased for his Mexican heritage (though born in Indiana), Trump eventually settled the case by shelling out $25 million.

Donald Trump has made it his life’s mission to vanquish his many enemies – real and imagined. At this point in his life, he has amassed an inexhaustible array of enemies including those who have ever made a disparaging remark against him, those who have failed to admire and publicly praise him, and those who have withheld their heartfelt support in his personal, business, and political affairs.

In this regard, Trump is more Nixonian than Richard Nixon himself.

If Trump continues down Nixon’s path, with his insatiable narcissistic craving for attention and admiration coupled with his intense and all-consuming need to control and subjugate, then the only person Trump will vanquish will be himself.