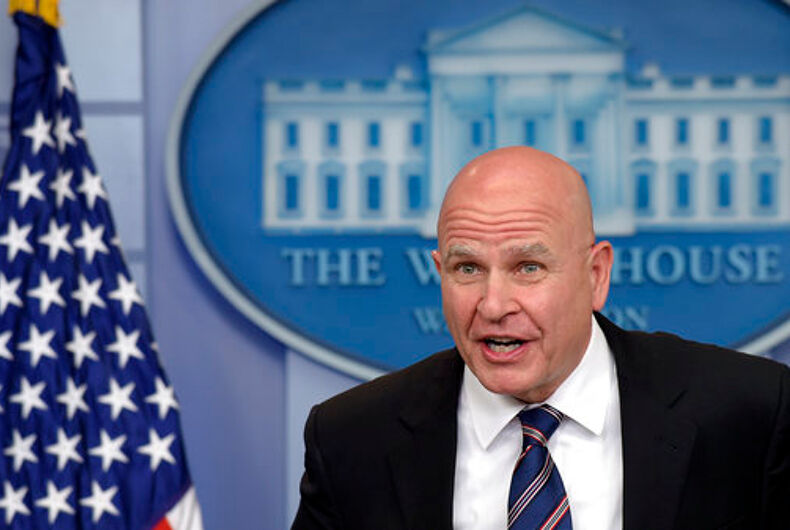 National Security Adviser H.R. McMaster speaks during a briefing at the White House in Washington, Tuesday, May 16, 2017. Is this what a leather daddy looks like? Photo: AP Photo/Susan Walsh

Yesterday on “The Alex Jones Show,” Republican political consultant Roger Stone expressed his angst with the national intelligence community by seriously contemplating the meaning behind their similar hairstyles (they don’t have any).

Jones claimed that’s because National Security Adviser Gen. H.R. McMaster — who recently spoke out against accusations President Donald Trump shared classified information with Russian officials — and other of his ilk are actually leather laddies. Being bald is just part of the attending look.

Media Matters shared a clip from the show in which Jones and Stone go down a gay baiting rabbit hole, landing in alternate reality that seems to say more about their own proclivities than those of members of the intelligence community.

ALEX JONES (HOST): Because that’s part of being a leather daddy.

STONE: Is it some secret club or something that they’re in? I mean, it defies the odds of coincidence, that every one of these guys have the same kind of look. There it is. Extraordinary. By the way [McMaster’s] smirk at the end of this kind of gives the whole thing away.

JONES: He looks like he could suck a golf ball through a garden hose.

At the end of the segment, which otherwise focused on accusations that “the left” was having a “spasm” and “acting like the President handed Putin the nuclear codes,” Jones circled back to his obsession with the shaved heads of members of the intelligence community.

“I’m not against people that have shaved heads, but there’s something going on there. I guess that’s ’cause they put their heads…in his butt or something,” Jones puzzles aloud before stopping himself. “All right, I’m sorry, I’m gonna stop, I’m outta control.”

Jones is known for promoting conspiracy theories including “Pizzagate,” and believes that both the attacks of 9/11 and the Sandy Hook school shooting were conspiracies. He has previously claimed to not be anti-gay, but that didn’t stop him from launching into a homophobic tirade against Rep. Adam Schiff.

But his revisionist history seems to be no problem for Trump, who told Jones in an interview during his candidacy: “Your reputation is amazing. I will not let you down. You will be very impressed, I hope, and I think we’ll be speaking a lot.”

No word yet on when Trump, whose abundance of hair no doubt assures his heterosexuality, will join Jones for a discussion of important topics, like why some men use tie bars.