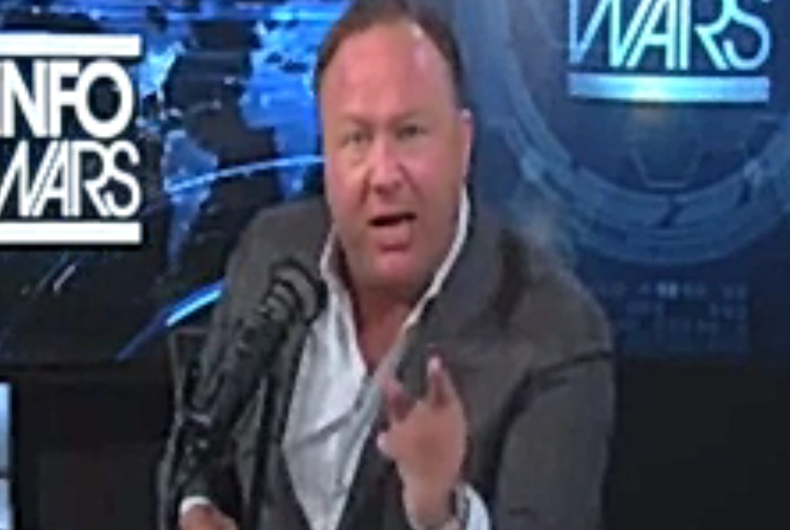 Rightwing radio blowhard Alex Jones engaged in a homophobic rant last week, calling a US congressman a “cocksucker” and a “fairy.”

Talking with conservative gadfly Roger Stone about Representative Adam Schiff’s investigation into Russian interference in the 2016 election, Jones became agitated. Stone referred to Schiff as a “pussy,” at which point Jones started his rant.

First, though, he made sure to say that he is “not against gay people,” which is the conservative way of saying “trigger warning, homophobic content to come.”

I’m not against gay people. OK. I love them, they’re great folks. But Schiff looks like the archetypal cocksucker with those little deer-in-the-headlight eyes and all his stuff. And there’s something about this fairy, hopping around, bossing everybody around, trying to intimidate people like me and you, I want to tell Congressman Schiff and all the rest of them, “Hey listen asshole, quit saying Roger and I” — and I’ve never used cussing in 22 years but the gloves are off.

“Listen you son of a bitch, what the fuck’s your problem? You want to sit here and say that I’m a goddamn, fucking Russian. You get in my face with that I’ll beat your goddamn ass, you son of a bitch. You piece of shit. You fucking goddamn fucker. Listen fuckhead, you have fucking crossed a line. Get that through your goddamn fucking head. Stop pushing your shit. You’re the people that have fucked this country over and gangraped the shit out of it and lost an election. So stop shooting your mouth off claiming I’m the enemy. You got that you goddamn son of a bitch? Fill your hand.

“I’m sorry, but I’m done. You start calling me a foreign agent, those are fucking fighting words. Excuse me.”

Stone talked for a bit, unfazed by Jones’s homophobia. Jones later interjected “[Schiff] is sucking globalist dick.” It is unclear what he meant by that comment.

Last week Schiff called for House Intelligence Committee chair David Nunes to recuse himself from the investigation into the Russian government’s possible interference with US elections. Schiff has stressed that there is no “definitive proof” of a connection between the Trump Campaign and Russian intelligence agencies.

Jones is known for his fondness of conspiracy theories. He recently apologized for promoting the “Pizzagate” conspiracy, which led an armed vigilante to enter a pizza restaurant looking for a child sex ring. Jones is a 9/11 truther and has said that the Sandy Hook school shooting was faked.

In an interview with Jones, then-candidate Donald Trump said, “Your reputation is amazing. I will not let you down. You will be very impressed, I hope, and I think we’ll be speaking a lot.”