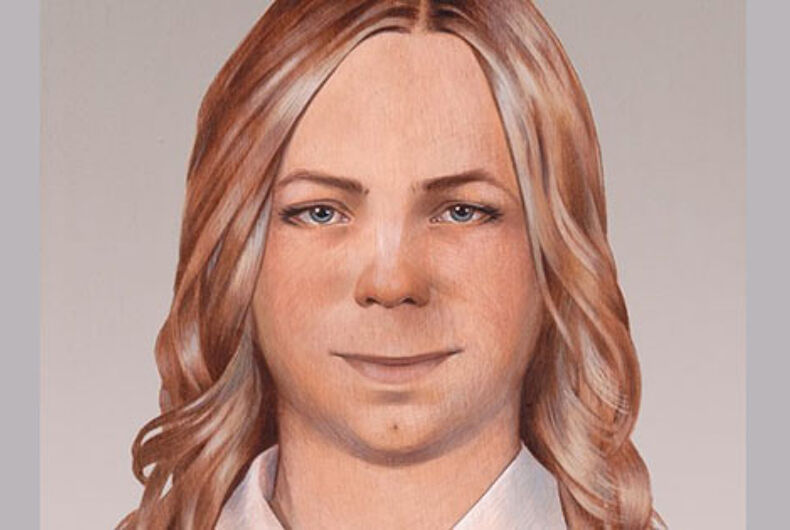 Chelsea Manning, the transgender woman who spent seven years behind bars for leaking government secrets — more time than any other U.S. citizen in the nation’s history — walked out of the military prison at Fort Leavenworth, Kansas Wednesday a free woman.

“I appreciate the wonderful support that I have received from so many people across the world over these past years,” she said in a statement to ABC News. “As I rebuild my life, I remind myself not to relive the past. The past will always affect me and I will keep that in mind while remembering that how it played out is only my starting point—not my final destination.”

And the first thing she is doing is starring in a documentary film about her ordeal. British filmmaker Tim Travers Hawkins is directing the movie, executive produced by Citizenfour filmmaker Laura Poitras. It is titled XY Chelsea.

Hawkins filmed Manning as she was released from prison.

“For the first time, I can see a future for myself as Chelsea,” she told CBS News in a statement. “I can imagine surviving and living as the person who I am and can finally be in the outside world. Freedom used to be something that I dreamed of but never allowed myself to fully imagine.”

Manning, a former intelligence analyst in Iraq for the U.S. Army, began her transition during her incarceration for giving classified information to WikiLeaks. In February she marked two years of receiving hormone treatments as part of her medical transition, but that only happened because of a lawsuit filed by the American Civil Liberties Union.

“Ultimately, we negotiated with the military and Chelsea was provided with cosmetics, grooming items available to other women in custody and hormone therapy,” attorney Chase Strangio told ABC News.

In 2013 she was convicted of 17 of the 22 espionage charges against her, but acquitted of charges alleging she aided the enemy or that she intended to harm the national security interests of the country. Manning was reduced in rank to private and sentenced to 35 years.

In January, President Obama commuted her sentence to time served and set her release for today. President Trump tweeted a few days after his inauguration that she was a traitor.

Ungrateful TRAITOR Chelsea Manning, who should never have been released from prison, is now calling President Obama a weak leader. Terrible!

Manning remains an active-duty soldier in the U.S. Army, but she won’t be paid a salary and as NBC News reported, it’s highly unlikely that she will be called to serve. However, her “excess leave” status will legally entitle her to military medical care, along with commissary privileges, while she appeals her conviction in the military court system.

Manning’s dishonorable discharge is not effective until the Army Court of Criminal Appeals has issued a decision and the Court of Appeals for the Armed Forces has either denied a petition or granted it and issued a decision, as ABC News reported.

So what is she doing first? Manning — through friends and advocates — has been tweeting her plans since having her sentence commuted.