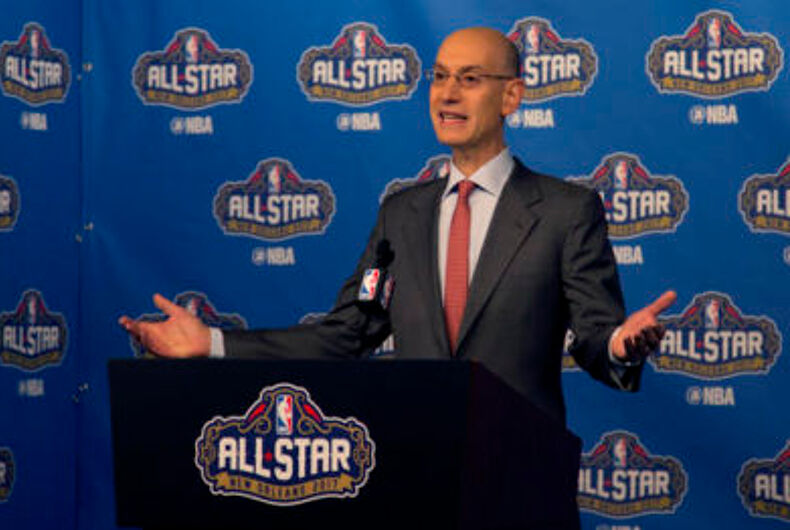 Charlotte will be eligible to host the 2019 NBA All-Star Game after a compromise deal to replace a North Carolina law that limited anti-discrimination protections for lesbian, gay and transgender people, the league’s commissioner said Friday.

“It’s not a done deal yet,” NBA Commissioner Adam Silver said. “The most recent change in the law does not mean the fundamental issues are resolved. But after considering all points of view, we determined that Charlotte will be eligible to host.”

The league’s Board of Governors discussed it during their meetings this week and made what Silver said was “not an easy decision.” The league will develop an anti-discrimination policy that participating groups including host sites, hotels and businesses would have to abide by before the 2019 game is committed to Charlotte. But Silver said it’s his expectation that Charlotte would get the game if those assurances are met within the next month or so.

Silver said he was proud the league opposed the law known as House Bill 2, and added: “And I’m also proud that we’re going back.”

“I understand that there is a segment of our fan base that believes that the change from HB2 to the new law is not enough, but it is change,” he said. “It’s incremental change. We were part of the movement, pushing for that change. It’s not everything we could have hoped for, but we’re prepared to go back.”

The NBA’s Charlotte Hornets issued a statement that the team would work with the league on returning the event, adding that “our city, our fans and our business community remain extremely enthusiastic in support of hosting.”

North Carolina’s Republican legislative leaders said they would be OK with whatever hosting agreement the NBA strikes with Charlotte businesses. That “shares our long-held belief that private businesses, including potential host venues, have every right to expand on federal non-discrimination policies however they wish,” Senate leader Phil Berger and House Speaker Tim Moore said in a statement Friday.

Silver said last year that returning the game to Charlotte in 2019 was “a high priority,” provided there was a resolution to conflicts over House Bill 2. Los Angeles hosts the game in 2018.

Charlotte was scheduled to host the game this year, but the NBA relocated it because of the law also commonly referred to as the “bathroom bill.” The Charlotte Regional Visitors Authority estimated the yanked event would have generated about $100 million in economic impact. That was part of more than $3.76 billion over a dozen years in lost business as a consequence of HB2, an Associated Press analysis found.

The mayors of New York, Washington, San Francisco, Seattle, Salt Lake City and other cities announced this week that previous municipal bans on taxpayer-funded travel to North Carolina will stay in place because discrimination persists in the replacement law.

The measure left some LGBT restrictions in place, including a moratorium until December 2020 on local governments passing broad nondiscrimination ordinances covering sexual orientation and gender identity. While the new law ended the HB2 provision requiring transgender people to use public restrooms corresponding to their birth certificates, state lawmakers remain in charge of future bathroom policies.

The president of the Washington-based advocacy group Human Rights Campaign, Chad Griffin, said Friday: “It is deeply disappointing to see the NBA reward North Carolina for doubling down on discrimination.”

Democratic Gov. Roy Cooper has said it was the best compromise that the Republican-controlled legislature would approve. The deal was done ahead of a deadline by the NCAA, which removed championship events from basketball-crazy North Carolina for the current academic year and threatened to exclude the state from hosting any new ones through 2022.

On Tuesday, the collegiate athletic association expressed concerns about the new law’s provisions but said it “meets the minimal NCAA requirements” to keep North Carolina in consideration as a host for championship events.

In a statement Friday, Cooper applauded the NBA announcement and added: “I will continue to fight for statewide antidiscrimination protections for our LGBT North Carolinians.”

Watch trans children & their parents read positive affirmations: ‘I am who I am’