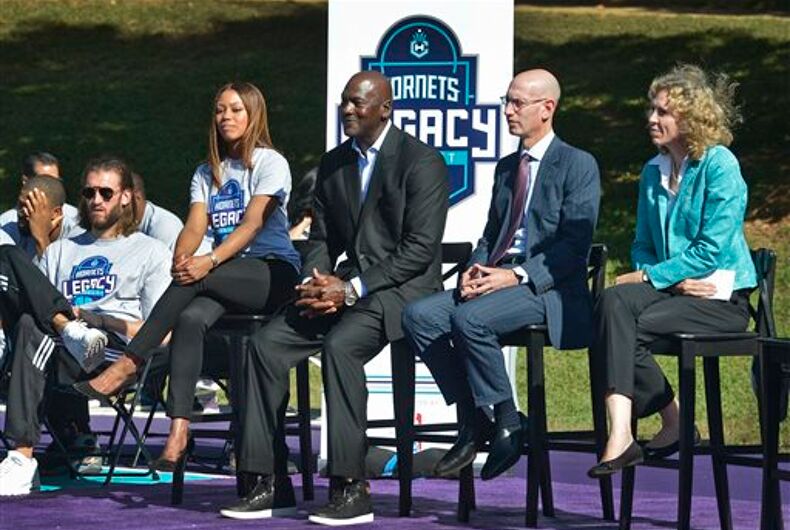 Charlotte Hornets owner Michael Jordan, center, with NBA Commissioner Adam Silver, second from right, and Charlotte Mayor Jennifer Roberts, right, attend the dedication of the basketball courts by the Hornets and NBA at Latta Park in the Dilworth neighborhood of Charlotte, N.C., Tuesday, Oct. 18, 2016. Silver said Tuesday that returning the All-Star Game to Charlotte in 2019 is "a high priority," provided there's a resolution to a North Carolina law that restricts the rights of LGBT people. Photo: (Davie Hinshaw/The Charlotte Observer via AP)

CHARLOTTE, N.C. (AP) — NBA Commissioner Adam Silver said Tuesday that returning the All-Star Game to Charlotte in 2019 is “a high priority,” provided there’s a resolution to a North Carolina law that restricts the rights of LGBT people.

The NBA recently decided to move the 2017 All-Star Game to New Orleans because it didn’t believe it could successfully host the All-Star Game and related events in Charlotte under the climate created by the law known as House Bill 2. Los Angeles hosts the game in 2018.

Several concerts and sporting events have been relocated from North Carolina because of HB2.

Jordan was not made available for interviews.

In a statement to the Charlotte Observer in April, Jordan said the Hornets “are opposed to discrimination in any form, and we have always sought to provide an inclusive environment.”

The law excludes gender identity and sexual orientation from local and statewide anti-discrimination protections. It also requires transgender people to use restrooms at schools and government buildings corresponding to the sex on their birth certificates.

Silver was reluctant to talk about what he wants to see changed with the HB2 law, but he did say he thinks it is a misnomer to call it the “bathroom bill,” as some have dubbed it.

“The issues that we are primarily focused on are those of acceptance and inclusiveness — and the bill goes far beyond directing what bathrooms people should use,” Silver said. “From that standpoint, it has been misrepresented. Ultimately for us, it’s about creating the right environment, specifically for a celebratory event like our All-Star team.”

During the ribbon-cutting ceremony at Latta Park, Jordan spoke about recent events in Charlotte including rioting following a police shooting of a black man last month.

“Charlotte is a very special place for me and my family,” he said. “Together me and the Hornets, and the colleagues of the Hornets, will continue to work every day to reject violence, change perceptions and restore the trust between law enforcement and the community.”

Jordan said seeing kids at the new court gave him hope for the future.

“It reminds me of the great lessons that I have learned from the great game of basketball — all of the things that the game has taught me,” he said. “How to learn. How work hard each and every day. The value of teamwork. The importance of communicating with your teammates, and how preparation and hard work and perseverance and what it teaches you every day. Winning feels great, but you can learn a lot from losing and competing.”