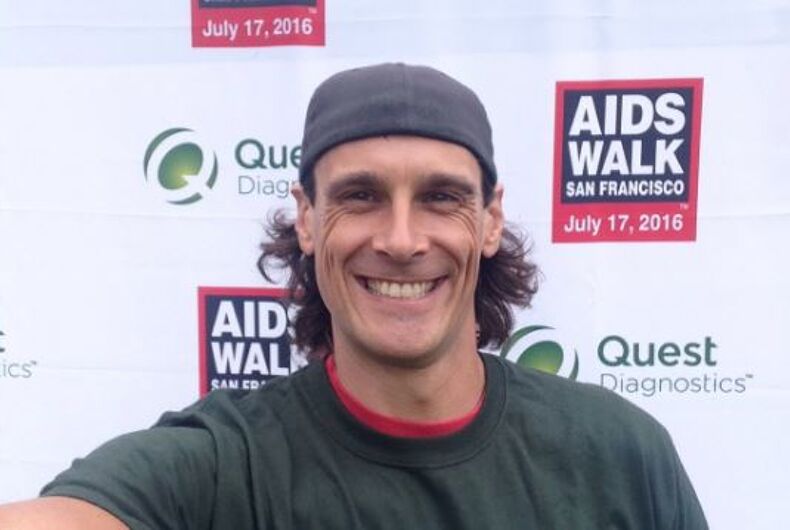 Kluwe, who played for the Minnesota Vikings at the time and was already an advocate for same-sex marriage himself, wrote an open letter to Burns that quickly went viral.

Kluwe reached a settlement with the Minnesota Vikings in 2014 to avoid a lawsuit after he alleged that he was fired due to his outspoken support for marriage equality, with the money going to organizations working for LGBTQ rights.

He is back with an open letter written in his usual bombastic and humorous style, this time addressing Donald Trump and setting him straight on appropriate locker room talk. Hint: it doesn’t include bragging about committing sexual assault.

You’re wrong [in claiming what you said is “locker room talk” and just how guys speak about women], and only the type of wrong an over-tanned ham hock like yourself can accomplish, plummeting past the morass of gross incivility into the abyss of depraved sociopathy.

How do I know this? Simple. I was in an NFL locker room for eight years, the very definition of the macho, alpha male environment you’re so feebly trying to evoke to protect yourself, and not once did anyone approach your breathtaking depths of arrogant imbecility. Oh, sure, we had some dumb guys, and some guys I wouldn’t want to hang out with on any sort of regular basis, but we never had anyone say anything as foul and demeaning as you did on that tape, and, hell, I played a couple years with a guy who later turned out to be a serial rapist. Even he never talked like that…

We talk about our families. We talk about our significant others, our children, and our parents. We talk about our fears that if a Hitler wannabe who can’t even string together a coherent statement on domestic policy becomes president, what that might mean for those of us who are married to a member of a minority community, or are a member of a minority community, or have children going to schools where hopefully nobody screams racial epithets at them or tells them to go back to [insert foreign country they couldn’t identify on a map here].

We talk about travel. We talk about the cities we’ve seen, the stadiums we’ve played in, what vacations we might take in the offseason. We talk about what country might make a good safe haven if a Russian-backed presidential candidate whose foreign policy agenda can best be described as “gross negligence mixed with a spicy dash of treason” were to have control of our nation’s nuclear arsenal, and whether his stubby little baby fingers are strong enough to push in the launch codes on sturdy military-grade hardware…

We talk about women (and sex!). We talk about wives, sisters, mothers, daughters, fans, and groupies. Most guys respect women, some guys don’t, but never have I heard anyone use your particularly disgusting brand of sadism that refers to women as objects and not people. Even the most debauched club-hopping party animal talks about women more civilly than you. We don’t let each other talk like that about women, because it lessens our humanity, and even though we’re modern-day gladiators, we still hold ourselves accountable to the idea of basic human decency…

So let me conclude with some advice for you, Donald. The next time you want to claim that something is “locker room talk,” take a moment to recognize the fact that were you in an actual locker room, you would be universally reviled as a cancerous, egotistical train wreck of a disgrace that no team could possibly find the time to employ and, honestly, would never even have on their draft board to begin with.

I’ve been in locker rooms, Donald, and you’re the type of narcissistic, pants-soiling fecal eruption that just doesn’t belong. Even football players are smart enough to know that.

What caused Laverne Cox to hesitate before taking on iconic Rocky Horror role?