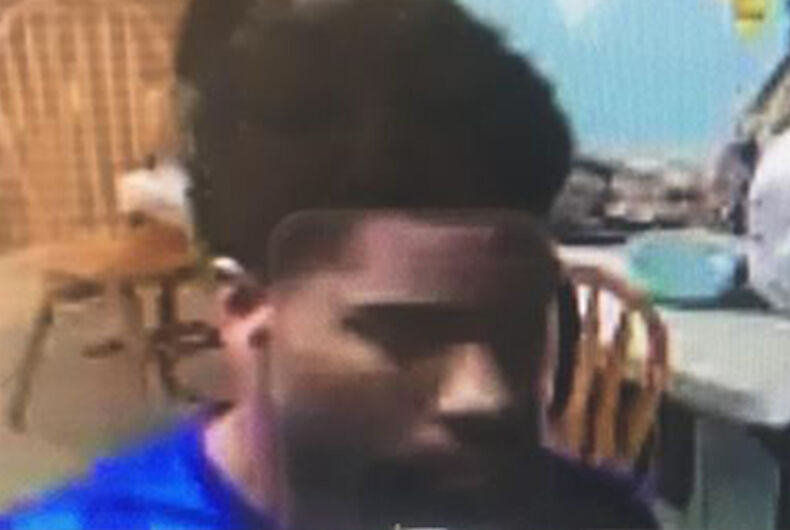 Police arrested Andrew Cook on suspicion of the crime.Photo: Screenshot

Police arrested a suspect on Monday, one Andrew Cook, for the vandalism and violent attack that took place Sunday afternoon at Casa Ruby, the LGBTQ community center in Washington, DC, the Washington Blade reports. The individual allegedly broke his way through the front door, then assaulted a staff member, and said he would return to kill someone.

The center posted a message on Facebook to notify the public of the incident shortly after it occurred.

“Alert! Alert!,” the center wrote on their Facebook page. “Our Casa Ruby LGBT Community Center was just vandalized and a staff assaulted by a transgender Hater 2 days after our mayor Muriel Bowser reported a 100% increase in hate crimes against transgender people, the violence is real 7 transgender women murdered this is how it begins and we refuse to be the next ones.”

The Metropolitan Police Department put out the following statement, including that the attack is being investigated as a possible hate crime:

The Metropolitan Police Department announced that an arrest has been made in connection with multiple offenses which occurred in the 2800 block of Georgia Avenue, Northwest on Sunday, March 12, 2017.

At approximately 2:00 pm, the suspect engaged in a verbal altercation with a victim inside of an establishment. Following the exchange, the subject physically assaulted the victim and made threatening remarks. The subject proceeded to exit the establishment and throw a brick at the door, causing damage.

Based upon the initial investigation at the scene and witness statements, the Metropolitan Police Department is investigating this as a potential bias related crime.

On Monday, March 13, 2017, pursuant to a DC Superior Court arrest warrant, 20-year-old Andrew Cook, of Southeast, DC, was arrested and charged with Felony Destruction of Property. Cook was additionally charged with Simple Assault and Threatening to Kidnap or Injure a Person.

Cook is being held in jail while awaiting trial. He is expected to appear in court Tuesday morning for a presentment hearing, at which time prosecutors with the U.S. Attorney’s office are expected to present formal charges against him, the Blade reports.

Casa Ruby’s founder and executive director, Ruby Corado, said that Cook was known to employees and clients, as he had been an occasional visitor to the center in recent weeks.

Corado said Cook identifies as straight and had been expressing an interest in meeting transgender women “for various services.”

Staff members say he became violent after he was forced to leave Sunday night for harassing clients. He is said to have returned with a large stone, breaking the glass door and reentering, where he proceeded to throw objects at the staff member who asked him to leave, assaulted her, and turned and made a death threat against another individual.

“Whatever his motive, he had no right to become violent and destroy our property,” Corado said. “He did not come for services. He came to prey on people.”

“We worked so hard to make this place a safe space for our transgender community,” said Corado. “And now this happens.”

Snowed in? This company is offering free help to folks who ‘want to get plowed’